An opposition councillor has said questions must be raised about the mayor's sobriety on Saturday evening. 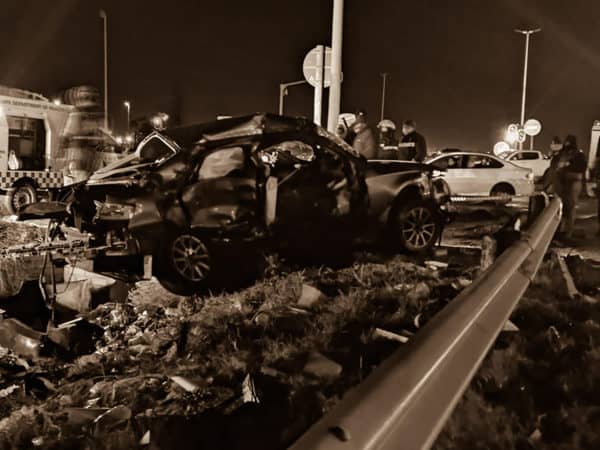 The remains of one of the vehicles in an accident in Nelson Mandela Bay involving mayor Nqaba Bhanga that left two people dead. Picture: Port Elizabeth Traffic Updates

After Nelson Mandela Bay (NMB) Executive Mayor Nqaba Bhanga was involved in a fatal two-car accident at close to midnight on Saturday evening, speculation has been raised that he may not have been in a fit state to drive himself after celebrating his birthday.

Bhanga, a Democratic Alliance (DA) councillor and the party’s Eastern Cape leader, was hospitalised at the Netcare Greenacres Hospital for what were initially thought to be “minor injuries”, according to mayoral spokesperson Leander Kruger – but they may in fact be more serious.

In a call with The Citizen on Sunday morning, Kruger said the mayor was due to go for surgery after it was found he was suffering from internal bleeding.

The spokesperson added that the surgery would determine what the cause of the bleeding was and that they were due to release another statement about the mayor’s condition later.

Patriotic Alliance (PA) councillor Marlon Daniels, who now sits in opposition in council after previously being in coalition with the DA, pondered on Sunday morning whether Bhanga’s blood alcohol levels had been tested following the collision, in which two people are confirmed to have died.

This would have been standard operating procedure for the police in such an incident.

Daniels also questioned why Bhanga’s VIP protection officers had not been with him.

Kruger told The Citizen, however, that there had been “nothing unusual” about the mayor driving himself, especially over a weekend and while not performing any official duties.

“It is at their personal discretion,” he said.

Bhanga is understood to have been celebrating his birthday, with questions being raised about why he was on the road at all after the Covid-curfew cut-off of 10pm.

He was in a blue Mercedes-Benz. The identities of the two deceased in the other vehicle, an Audi, have not yet been made public, aside from the fact that one occupant was male and the other female.

Daniels warned in a live Facebook video that “big trouble is coming if blood alcohol levels were not taken, because then this is a DA cover-up”.

He also drew reference to Bhanga allegedly also having been at the centre of another fatal accident in 2018, when two students from the Nelson Mandela University had died following an accident involving Bhanga’s driver at between 1am and 2am.

At the time, Bhanga had been the MMC for human settlements. Daniels said questions were raised in council about why Bhanga’s role in the matter had not been considered if the guard had taken instruction from Bhanga, who was at a wedding afterparty, to allegedly go fetch “his girlfriend”.

“What was [Bhanga] doing in the tavern at that time?” Daniels asked.

He alleged Bhanga had a severe drinking problem.

“Bhanga marinades himself in alcohol. I know this as a fact, because I’ve seen it. If your drinking interferes with your life, then you should stop drinking.

“It’s not been a good week for him [Bhanga]. Just the other day, allegations came out that he assaulted his girlfriend. I can only assume that this was also due to his alcohol abuse.”

Daniels called for Bhanga to be sent to rehab.

“This is the second time in three years where two people died where Bhanga was involved.”

Kruger told The Citizen that the mayor’s office would not engage in speculation or respond to any allegations about the matter at this time, particularly since a police investigation was under way.

The SA Police Service confirmed in a statement that two people had been fatally injured in the collision at 11.30pm on Saturday at the intersection of St Leonards Drive and Uitenhage Road.