Refugees camping outside of the UNHCR offices had already pre-empted the outcome of the application, saying they would not leave willingly. 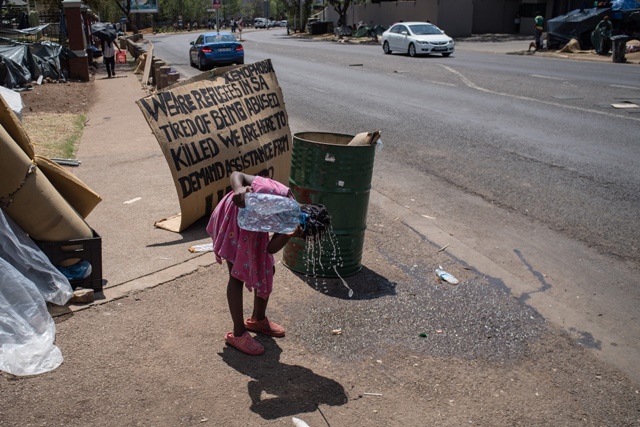 An urgent court application to remove refugees who are staging a protest in Pretoria has been postponed again, following an application by the national and provincial police commissioners to join the case.

The national and provincial police commissioners in Gauteng brought the application to be added as respondents because the police will be held responsible if an order to remove the refugees from the United Nations High Commissioner for Refugees (UNHCR) offices in Pretoria, is executed.

The original urgent application by the Waterkloof Homeowners’ Association and Brooklyn and Eastern Areas Citizens’ Association only cited the minister of police, who is not responsible for the day-to-day workings of law enforcement officers.

The minister did, however, file a notice to abide by the court’s decision.

The North Gauteng High Court in Pretoria ordered that the national and provincial commissioners be joined as the seventh and eighth respondents and that they file their answering affidavits by Monday, November 11.

The matter will then continue on November 13, giving other parties a day to respond to the answering affidavits.

News24 previously reported that parties involved in the matter were at an impasse after they failed to reach an agreement on how to proceed.

The home associations representing residents in the two upmarket suburbs have approached the court seeking to prohibit the refugees from staging a sit-in.

The group have been camping outside the offices of the United Nations High Commissioner for Refugees (UNHCR) for a month.

Residents have asked the court to compel law enforcement agencies to deal with the refugees for contravening municipal by-laws and that the Department of Home Affairs should identify the refugees as well as their status in the country.

Refugees camping outside of the UNHCR offices had already pre-empted the outcome of the application, saying they would not leave willingly.

Democratic Republic of Congo (DRC) national Aline Bukuru, who says he has been a refugee in South Africa for the past 12 years, told News24 previously that they were prepared for the worst possible order by the court.

He said if the order was granted, prohibiting them from staging a sit-in, the police would have to forcibly remove them, as they had nowhere else to go.

Fellow DRC national, Alex Mongo, who says he has been in South Africa since 2008, agreed with Bukuru.