Zuma supporters can’t go to his trial due to lockdown

However, the regulations won't stop a group of Zuma supporters from lobbying at a hotel in Johannesburg instead. 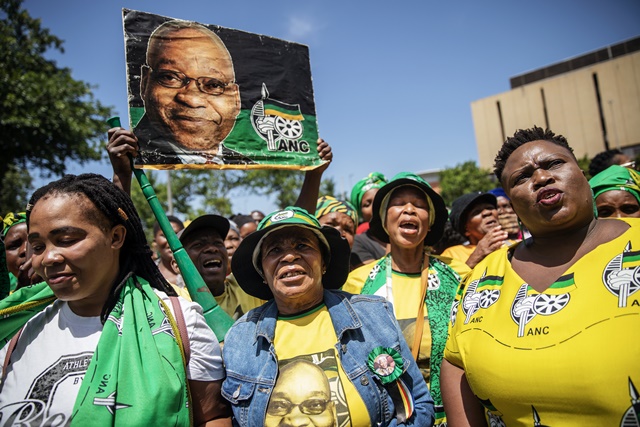 The normally boisterous support in KwaZulu-Natal for former president Jacob Zuma is expected to be watered down to just a few people on Tuesday thanks to Covid-19 lockdown regulations which prohibit gatherings.

Zuma is expected back in the KwaZulu-Natal High Court in Pietermaritzburg on Tuesday for the start of his pre-trial proceedings.

The former president usually has a strong contingent of supporters in Pietermaritzburg for days such as Tuesday, but with new rules kicking in to prevent the spread of Covid-19, it may be a subdued affair.

“Everyone was looking forward to this day and was interested in coming to give support. However, I was representing the group in the provincial joint operations committee (JOC) and agreed that because of the Disaster [Management] Act for Covid-19, no gathering outside court would take place,” Bishop Vusi Dube, the head of Zuma’s supporters in KZN, said on Monday.

He said that just a handful of people were allowed to be inside court.

“Only 15 people, members of the family and one or two of us in the support group. We agreed that logistics would be too much of a taboo. We would have to ensure sanitisation and social distancing. It was also difficult to transport seven people per taxi.”

Dube said supporters would, however, keenly watch proceedings on television.

“We are not going to be assembling our people in court but obviously, all our network circles will be connecting.”

He said the supporters were upbeat and believed the National Prosecuting Authority (NPA) was on its back foot as a potential trial date is argued for this week.

However, the regulations won’t stop a group of Zuma supporters from lobbying at a hotel in Johannesburg instead.

Supporters were invited to watch the trial at the Booysens Hotel and Conference Centre.

According to a pamphlet that supporters had issued, which News24 has seen, the venue will only cater for 50 people and those who do not have masks will be denied entry.

At an appearance earlier this year, Judge Dhaya Pillay told Zuma’s legal team that they must give reasons why Zuma missed a previous court appearance.

It was reported that in delivering her decision on Zuma’s absence, Pillay outlined that, while he may have been ill, there was insufficient evidence in court to prove this.

Zuma’s lawyer at the time, Daniel Mantsha, who has since been sacked, presented the court with a document he said was from a military doctor.

However, Pillay said there were issues with the document before court. She said that, even though it purported to be from a military hospital, no other proof was provided to her.