The woman is accused of setting a shack alight in the Marlboro South Industrial area, resulting in the death of four people. 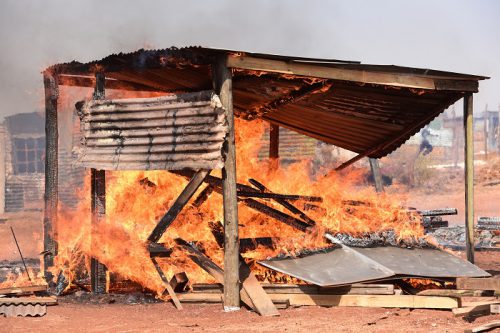 A shack on fire during the battle between community members and Red Ants at Vlakfontein extension 4, Johannesburg, 22 September 2017. Picture: Nigel Sibanda

A 34-year-old woman was served four life imprisonment sentences at the High Court in Johannesburg on January 25.

This comes after four people died when a makeshift building at Marlboro South Industrial area was set alight by the woman, reports North Eastern Tribune.

According to the spokesperson for the Bramley police station, Captain Molefe Mogodi, the woman set fire to the makeshift building in the middle of the night on April 6 last year.

Mogodi explained there were people in the shack at the time, and four of them died as the shack was burning.

“The woman then disappeared without anyone noticing her. The police were called to the crime scene. The investigation was conducted and, with the help of emergency services, it came to light that petrol was used to burn the shack down.”

Mogodi explained that the matter was then assigned to Bramley detectives for investigation. “The investigation led the detectives to a woman who was responsible for causing the fire. It was found that the accused was trying to get rid of the other woman whom she accused of being in love with her man.

“She was subsequently arrested during the preliminary investigation.”

Mogodi stated that the High Court in Johannesburg convicted and sentenced the accused, Vanessa Mpho Sidimela, as follows:

Head of the detectives at Bramley police station, Lieutenant Colonel Nobela, shared satisfaction with the outcome of the case. He said to the members, “The pride of every crime investigator is the conviction. The outcome of this matter is a victory to the families as well as to the police.”