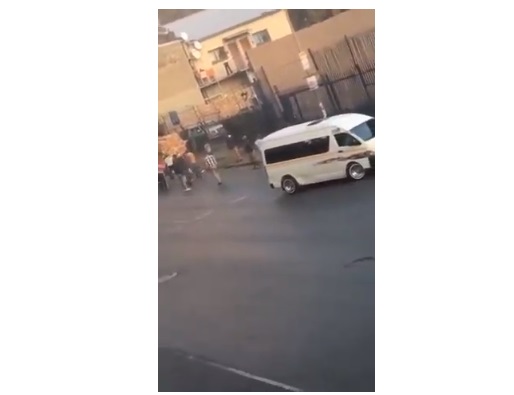 A video has emerged on Facebook of an apparent gunfight in the Johannesburg CBD.

The horrific footage shows gunmen apparently targeting a man – who, according to the woman taking the footage, surrenders.

The camera soon pans on to the man as he is surrounded by an armed mob.

One armed assailant can be seen running towards the victim, as if to ensure he is dead following several preliminary shots. He then kicks the apparent victim before unleashing more bullets into the body.

The mob then throws rocks at the man, who they presume is dead. The armed mob then walks away as though nothing happened.

Repeated attempts to contact the police for a response were unsuccessful at the time of publishing this piece, but it will be updated as soon as we do get a statement from authorities.

The video caption suggests the incident happened on Nugget and Bree streets, a route for taxis from Soweto to Johannesburg.

It comes after Soweto taxi routes were closed due to violence among taxi operators today. Commuters were forced to use alternative transport as six routes and two major taxi ranks were closed for six months by transport MEC Ismail Vadi due to the ongoing violence.

The Witwatersrand African Taxi Owners Association and Nancefield Dube West Taxi Association have been at the centre of the conflict and Vadi has appealed for patience while the matter is attended to.

“There will be a fair amount of public transport services available to the residents of Soweto and the immediate vicinity of the taxi ranks. There will be a degree of inconvenience, and our feeling is that residents should try to make alternative arrangements; it’s absolutely important to do so.”