They yesterday marched, calling for justice for their slain friend and protection from allegedly dangerous pupils who victimise them daily. 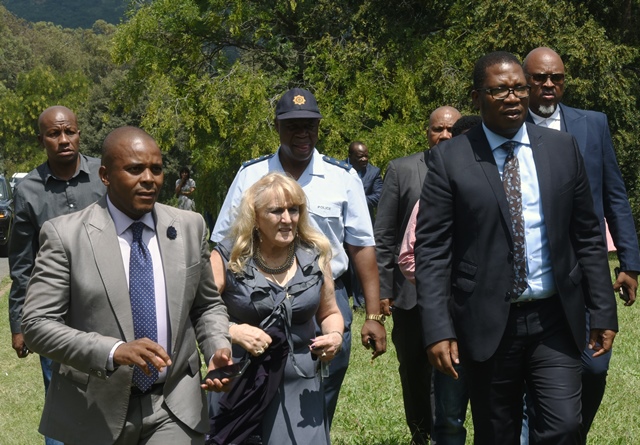 Gauteng Education MEC, Panyaza Lesufi arrives at the crime scene of a Mondeor High School child who was stabbed to death near the school,13 March 2018. It is alleged three other pupils from other schools were responsible for the stabbing. Picture: Nigel Sibanda

Mondeor High School pupils in the south of Johannesburg have claimed they were targeted by violent pupils from a nearby school.

This comes in the wake of the death of 19-year-old Kulani Mathebula who was stabbed to death, allegedly by three younger pupils from the nearby school.

Mathebula’s grieving peers yesterday staged a march, calling for justice for the slain teen and protection from the allegedly dangerous pupils who they said victimised them on a daily basis.

A parent at the high school who did not want to be named said she lived in constant fear that her children could fall victim to the gang-like activity of local teens. The said teens are believed to be pupils at a nearby high school which caters for youths with learning difficulties.

She said last year she called the Mondeor school management demanding they deal with alleged bullies, who targeted and robbed pupils from other schools in the suburb.

Police’s Captain Kay Makhubela said he was not in a position to name the school from which one of the suspects, a 13-year-old boy, arrested on Wednesday, was believed to be attending.

The boy and two other teenage suspects arrested yesterday morning will appear in the Johannesburg Magistrate’s Court today on murder-related charges. The trio were arrested in Soweto and Naturena in the south.

A video which captured the attack on Mathebula, also believed to have identified the three suspects, was handed over to police on Wednesday afternoon.

Gauteng education MEC Panyaza Lesufi praised the police’s swift action in arresting the three, but lamented the tragedy of having handed over a dead body to a parent.

“When they heard the news that they’ve arrested somebody, it brings that little relief.”

Lesufi’s spokesperson Steve Mabona said the department was not in a position to say whether there was a turf war between pupils of at least two schools in the Mondeor area and whether the special school was involved.

The tragic incident gave rise to a wave of panic among pupils and parents at both schools, with social media messages alluding to calls for revenge.

Mathebula’s memorial service will be held today at the school, as some pupils were expected to be writing their term-end exams.