Despite number plate left at the scene, Ngwako Modjadji’s killer remains at large

At his funeral, the family pleaded with police to speed up their investigation. 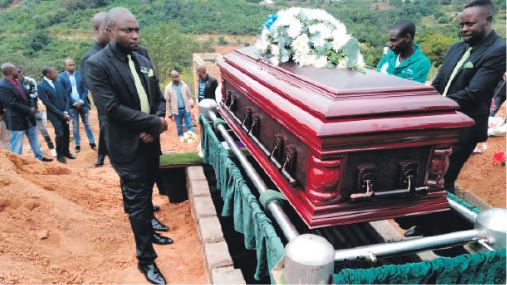 The family of slain senior political journalist Ngwako Modjadji, who was killed in an apparent hit-and-run accident in Soweto, say police are dragging their feet in bringing the culprit to book.

Speaking at his funeral on Saturday, Ngwako’s devastated brother, States, pleaded with police to speedily arrest the perpetrator.

“I feel like I am failing my brother. Had it been me, he would have cracked the case now and made sure my killer was arrested, named and shamed,” said the tearful Limpopo lawyer.

“It is now a week since my brother’s life was cut short. I think we have given the police all that was expected of us.

“But I am taken aback that to this day nothing is forthcoming.

“To make matters worse, we do not have even an update. All we know is that police are still running investigations.

“We want to know how far they have gone. What have they established since the tragic passing of my brother?” he said through his tears.

Modjadji said the family had hoped there would have beeen progress by now.

“This is because police found a number plate from the car metres away from the scene.

“They told us they traced it and found that it belonged to an old man, who claimed the number plate had been stolen.

“We don’t know whether to believe this was a hit or purely an accident. That is why we want the police to do their job and give us the outcome of the investigations.

“We have buried the remains of my brother today, but it will take a miracle for us to forget the incident, especially if the police continue to work at a snail’s pace.”

Yesterday, Gauteng police spokesperson Captain Mavela Masondo said no arrests had been made so far.

“We are following the leads and once an arrest is made we will update the family. We, however, plead with those who were in the car that killed Modjadji to come forward because if they don’t they will also be charged for defeating the ends of justice.”

“He was a remarkable journalist who did not practise brown envelope journalism, unlike some of you who are controlled by a journalism of brown envelopes,” she said, to the dismay of the many journalists from Sowetan, The Citizen and City Press who were there in their numbers to give their former colleague a fitting send-off.

The mayor for the Mopani district municipality, Nkakareng Rakgoale, said Modjadji had been like the brother she’d never had.

She said he was the pride of Limpopo and had always held the flag of Limpopo high because he was a transparent and hard-working journalist.

Representing the South African Communist Party (SACP) and the ANC, SACP spokesperson Alex Mashilo said the country was poorer without journalists such as Modjadji.

“Ngwako was the mirror of the nation,” he said.

WATCH: Audi smashes into getaway car during attempted hijacking in Tshwane
4 days ago
4 days ago
PREMIUM!

WATCH: Audi smashes into getaway car during attempted hijacking in Tshwane
4 days ago
4 days ago
PREMIUM!