The community was more concerned about the 17-year-old boy, who seemed haunted by the spirits.

Kgomotso Khalushi, who recorded the mother of the 17 year old when she admitted to the murders stands near the shallow grave, 6 August 2020, Olievenhoutbosch. Picture: Jacques Nelles

Four suspects are in the Pretoria Magistrate’s Court facing murder charges on Friday. They are alleged to have buried three victims in a makeshift grave, in Olievenhoutbosch.

Police have confirmed digging for the bodies has been concluded and a murder inquest was opened pending forensic confirmation of the murders, and that police have left the crime scene – a yard in which the bodies were found.

While police are left with the scientific task of determining if the bones were human, some community members argue that had it not been for the community, the police would not have reacted to the gruesome find.

A secretary of the ANC Ward 106 says the manner in which police handled the case was deplorable.

He told of how the families of the buried bodies were in disbelief and they could have gotten answers sooner. 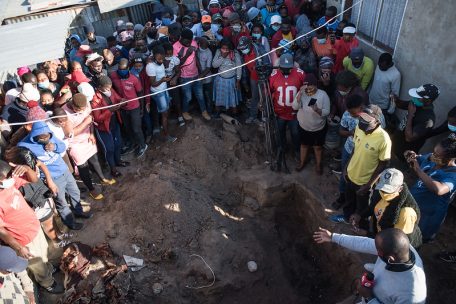 1/2
The Olievenhoutbosch community can be seen gathered around the grave where three bodies were found after a 17-year-old and his mother admitted to killing three people and burying them in the yard, 6 August 2020. Picture: Jacques Nelles 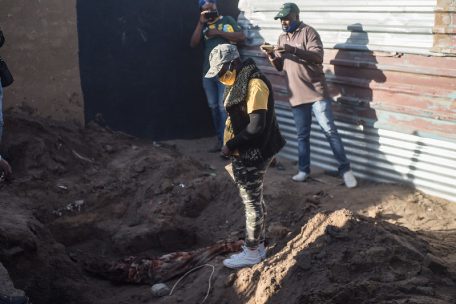 2/2
Kgomotso Khalushi, who recorded the mother of the 17-year-old when she admitted to the murders stands near the shallow grave, 6 August 2020, Olievenhoutbosch. Picture: Jacques Nelles

While police had not confirmed the tally of bodies found, the community suspected that two of the bodies may have been buried on top of each other.

He said the community was more concerned about the 17-year-old boy, who seemed haunted by the spirits and had wanted a traditional healer to intervene.

The community member spoke of how there had been undying suspicions about the missing victims for years, with little to no effort from police.

Police spokesperson Brigadier Mathapelo Peters confirmed digging was concluded but would not confirm if the bones recovered were three bodies.

She had earlier given a 48-hour deadline on wrapping up the case. She said police were confident regarding their case which was strong, judging by the statements taken from witnesses.

Within 48 hours, police hoped to have a concrete case for prosecutors.

Police responded to the suspected murder of three men after a teenage boy and his mother allegedly confessed to killing them over the past years.

A 17-year-old boy, his mother and two other suspects are in police custody since Tuesday night after the confession to community leaders.

According to deputy chairperson of Sanco’s Olievenhoutbosch branch Kgomotso Khalushi, who was approached by the boy and his mother to confess the crime on Tuesday night, the pair first killed the mother’s boyfriend in 2017.

The following year, the two then allegedly killed the mother’s new boyfriend.

“Apparently the boy hit the boyfriend with a hammer on his head and the mother hammered his limbs to weaken him. They claimed they killed him because he was telling people that the woman had killed her previous boyfriend.”

But apparently the boy’s brother witnessed the alleged killing.

“The brother kept threatening to call the police. Last year, the boy then hit his brother on the head with a bottle, took off his clothes and buried him. It seems he was buried alive because he was still conscious,” Khalushi explained. 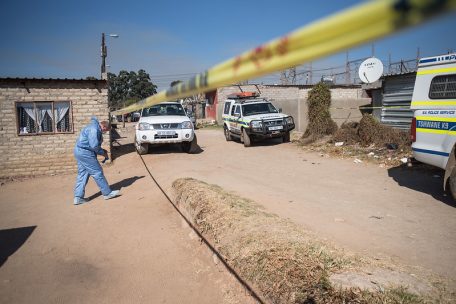 1/2
Investigating Police officers at the scene where a 17-year-old and his mother admitted to killing three people and burying them in the yard, 6 August 2020, Olievenhoutbosch. Picture: Jacques Nelles 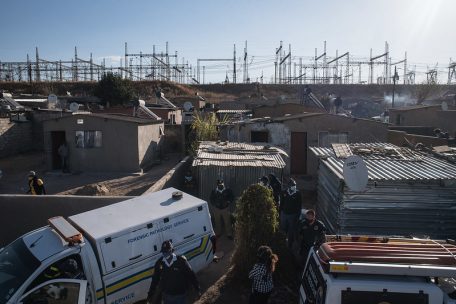 2/2
Police officers stand around the Forensic Pathology Service vehicle at the scene where a 17-year-old and his mother admitted to killing three people and burying them in the yard, 6 August 2020, Olievenhoutbosch. Picture: Jacques Nelles