Prisoner who allegedly murdered warder will not be poisoned, says Correctional Services

The 30-year-old man, who is allegedly behind the murder of a Department of Correctional Services official, is due in court on Wednesday. 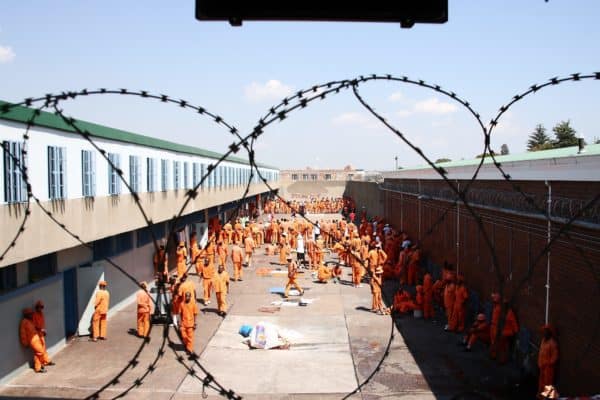 The Department of Correctional Services has dismissed claims that the inmate who is alleged to have murdered a 50-year-old official at the Leeuwkop Correctional Centre in Johannesburg will also be killed for his crimes.

The official, identified as Eunice Moloko, was killed while she was on duty last Tuesday at the Leeuwkop’s Covid-19 isolation site.

While Moloko’s body was discovered on the bloody floor covered with her jacket, the details surrounding her murder remain sketchy.

Moloko, who was allegedly strangled and raped, had been working at the Department of Correctional Services for 23 years.

An investigation into the murder has already been launched.

The 30-year-old man, who is allegedly behind the murder, has since been arrested and charged.

This promptly sparked rumours that the suspect would be poisoned or hanged in an effort to make it appear as a suicide due to his “psychological issues”.

However, the department has rejected the rumour, saying the suspect was in a different section of the facility.

“The inmate alleged to have murdered Ms Moloko is at a C-Max facility and will be impossible for other inmates or officials to either kill or poison him,” Correctional Services spokesperson Singabakho Nxumalo told The Citizen on Monday morning.

Nxumalo said the suspect was due to appear at the Randburg Magistrate’s Court on Wednesday, adding that the department “did not have any psychological evidence on this inmate”.

Deputy Minister of Justice and Correctional Services, Nkosi Phathekile Holomisa, previously described Moloko’s brutal murder as “a sad incident”, especially in the month when the country was celebrating women.

Holomisa commended the investigators for the good work that led to the suspect’s arrest.

He also said the department was also looking at the facility’s management to understand if there was any case of negligence from their side.

“Should investigations reveal that there was negligence on the part of management in the centre, the department will not hesitate to take tough action against anyone implicated,” said Holomisa.

The Police and Prisons Civil Rights Union (Popcru) has demanded answers over the murder.

“It should be explained as to why she was individually booked at the Covid-19 isolation ward, where inmates who have tested positive for the pandemic are kept? As per security policies, why did she not get security visits throughout the day? Why was she not relieved during the expected lunch time? And why was there no concern when she had not submitted the ward keys during the expected knock-off time?” the union said in a statement.

READ MORE: Prisoners livid over delayed parole due to being ignored by dept

Popcru said the incident was a result of negligence from the management of the correctional facility.

“Most concerning is that the acting area commissioner, Mr [Mokhemi] Molefe, has reneged from his leadership duties by failing to give clarity at this time of despair. This can only be seen as a form of negligence from the management in the centre, and can never be justifiable.

“This unfortunate loss of life under mysterious circumstances cannot go without being fully interrogated, and the negligence demonstrated by the [department’s] management at the centre cannot be left without account, with those responsible taking full responsibility.”

The union has also called for the immediate suspension of Molefe, the head of the prison and the security manager.