The driver escapes after muscling the smaller car out of the way despite being shot at on the same day the crime stats were released. 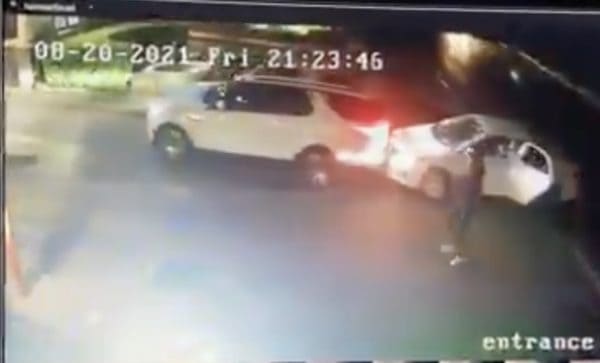 CCTV footage of a failed hijacking of a Land Rover outside a complex in Lonehill, Johannesburg, was shared on Saturday morning by anti-crime activist Yusuf Abramjee.

According to the time stamp on the footage, the incident happened on Friday night.

ALSO READ: Crime stats: ‘Never seen before’ but not as bad as it looks, assures Cele

The would-be hijackers pulled up in what looks like a white Toyota sedan behind their target, hoping to trap him. The driver initially tries to reverse into them and push them out of his way, which he eventually achieves.

He escapes despite one of the attackers trying to shoot him, though according to the commentary on the recording, he was “lucky” that the gun in question jammed.

In the clip below, frustration is expressed that the cameras were not able to capture the licence plate on the assailants’ vehicle.

Be aware there is one moment of explicit language in the clip.