The R150 million looted through the irregular Digital Vibes saga was divided up in boxes, and paid for some seemingly frivolous purchases. 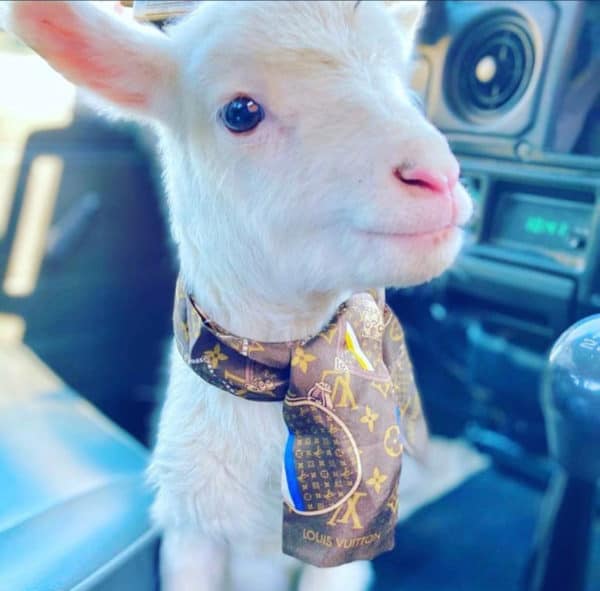 "You could neeeeeeever!" Dedani Mkhize's lamb absolutely dripping with swag, possibly paid for with your tax money.

This is something former health minister Zweli Mkhize’s son Dedani apparently wasn’t aware of a few months ago when he tweeted pictures of a lamb sporting a Louis Vuitton scarf, following him around his Kwazulu-Natal midlands farm and posing in the cabin of his Toyota Land Cruiser.

This is the same Land Cruiser which was also apparently paid for by Digital Vibes, which means it was technically funded by taxpayers who footed the bill for the R150 million contract awarded to the company by the Department of Health.

It’s impossible to determine if the stylish lamb’s accessory was authentic, or just a cheap knock-off, but real Louis Vuitton scarves like the one he was wearing sell for anything between $750 (R11,300) and $2500 (R37,800) depending on the material it is made of and the design.

The backlash he received at the time apparently prompted Mkhize to delete his Twitter account, since there is now no trace of the @DedaniMabhunu account. It seems to have disappeared some time around the middle of August 2021.

The internet, however, doesn’t forget, and on Wednesday, as the Digital Vibes report by the Special Investigating Unit was finally released after spending months on the president’s desk, people were furious over the excesses revealed in the report and remembered Dedani’s stylish little lamb.

Dr Zweli Mkhize and his entire family should go to jail!

But the swanky livestock apparently wasn’t the only way the Digital Vibes looters splashed taxpayers’ cash.

Tahera Mather, one of the owners of Digital Vibes and a close associate of Zweli Mkhize’s, reportedly splurged R90,000 at a Gucci store in Sandton, blew almost R200,000 on a Turkish holiday, paid R530,000 for home renovations which included almost R200,000 for Smeg appliances, among many other things.

Throughout the investigation and even after the report had been handed over to President Cyril Ramaphosa, Mkhize maintained his innocence, saying he had never personally benefited from the money paid to Digital Vibes.

The SIU’s report, however, makes shocking findings to the contrary.

The SIU found that Digital Vibes paid R6,720 for repairs at Mkhize’s home. Invoices indicate a cell phone number which Mkhize denied belonged to him, despite eNatis records showing the number linked to vehicles registered in his name.

The SIU also found evidence of Dedani Mkhize receiving a “gift” of R300,000 from a Digital Vibes account on 2 May 2020. The minister later claimed he was unaware of said gift from Mather to his son. Two days later, the generous Mather also paid R160,000 to a Pietermaritzburg car dealership, to pay for the aforementioned second-hand Toyota Land Cruiser, which was registered in the younger Mkhize’s name.

Also Read: Zweli Mkhize – The rise, fall, and scandals along the way

Most shocking, however, is how the company seemingly managed to launder R3.400,000 through a Cash and Carry Wholesaler.

According to the report, Mather was contacted by one of the SIU’s witnesses, and “inquired if he knew of anyone that could give her cash in return for an EFT transfer that she would do for the said cash value.”

The witness put her in touch with the wholesaler, to whom Mather transferred the nearly three and a half million Rand. In return, the wholesaler packaged the cash equivalent in boxes and plastic bags, which were collected from him by Mather, and other members of the Digital Vibes team.

It also found that Mkhize junior collected several of these boxes of cash from Digital Vibes’ director Radha Hariram, at a petrol station where she worked as a manager.

Even after all this evidence was presented, the former minister apparently continued to deny having received any benefits from dealings with Digital Vibes. The SIU explains that the minister “should have made further inquiries
before making this misleading statement.”

Mkhize resigned from his position as health minister on 5 August 2021. Ramaphosa reshuffled his Cabinet hours later, and thanked Mkhize for his service as health minister, making no mention of the Digital Vibes scandal, despite having had the report on his desk already.

At the time, Mkhize indicated that he would take the report to a judicial review, and accused the SIU of having had a predetermined outcome in their investigation into the R150 million contract.

The SIU’s Andy Mothibi last month told Parliament’s Standing Committee on Public Accounts (Scopa) that Mkhize “may have committed actions of criminality”, as well as failing to comply with the Constitution.”

They have also advised for criminal actions against other Health Department officials implicated in the report.

The department, which says it is still studying the report, recently suspended its director-general Sandile Buthelezi, pending a disciplinary hearing into his role in the R150 saga.