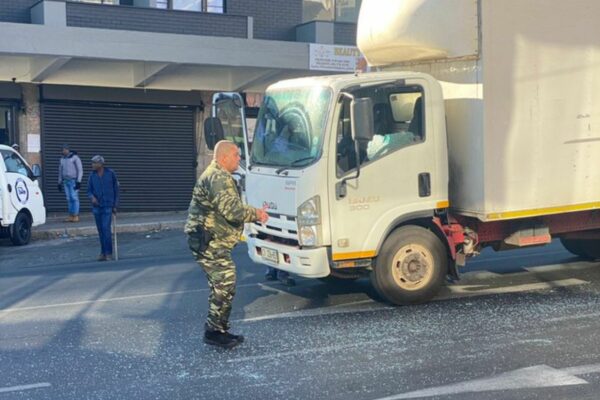 One person has been injured in a dramatic shootout in Melville, north of Johannesburg, on Monday morning.

It is understood a group of armed suspects allegedly entered May’s Pharmacy on Monday, and robbed them of an undisclosed amount of cash.

The criminals were accosted by armed response officers before fleeing the scene.

Melville Security Initiative spokesperson Danyle Nunes said a truck driving past the robbery was caught in the crossfire between the armed response officers and the criminals.

“When the armed response officer arrived, a shootout happened and a person was caught in the crossfire. The driver of the truck is fine, the passenger was transported in an unknown condition at this point in time.”

Nunes said Third and Fourth Avenue in Melville have been closed as authorities comb the scene and conduct an investigation into the robbery.

Watch the video of the shootout:

Motorists have been advised to seek alternate routes and stay clear of the area.

930 arrests made for various crimes

Meanwhile, Gauteng police have arrested at least 930 people, including suspects wanted for various crimes committed across the province.

The suspects were handcuffed during several operations that were conducted throughout the province over the weekend.

Also Read: Over 900 people nabbed for various crimes in Gauteng

They were arrested for various crimes including possession and dealing in drugs, possession of suspected stolen property, unlicensed firearms and ammunition, illegal immigrants and illegal dealing of liquor amongst others.

Sello said the suspects are expected to appear at different magistrate’s courts from Monday.

ALSO READ: Over 900 people nabbed for various crimes in Gauteng