This after the City of Cape Town wrote to the EFF earlier this month informing the party that their election banners were in violation of its poster rules. 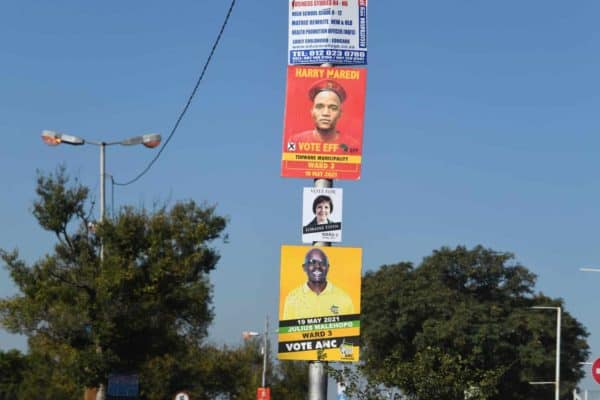 Picture File: A general view of local elections campaign posters on 10 May 2021 in Pretoria. Picture for illustration: Gallo Images/Lefty Shivambu

The Economic Freedom Fighters (EFF) has welcomed the Western Cape High Court’s ruling in its battle with the City of Cape Town (CoCT) over its election banners, saying the Democratic Alliance (DA) is frightened of losing its majority in the metro.

Acting Judge Adrian Montzinger on Tuesday granted the EFF’s urgent application for an interim interdict preventing the CoCT from removing their election banners.

This after the metro wrote to the EFF earlier this month informing the party that their election banners, hung on poles and bridges around the city, were in violation of its poster rules. The city demanded that the Red Berets remove the banners or else it would remove them.

Montzinger granted the EFF the interim interdict pending the outcome of its constitutional challenge of the CoCT’s by-laws and policies.

The EFF’s elections spokesperson Leigh-Ann Mathys slammed the CoCT’s for threatening to remove the banners, saying it had put in place draconian by-laws prohibiting free election campaigning in its backyard ahead of the 1 November municipal elections.

“Currently, the DA is frightened of the real threat that is certain to happen: its majority in the Cape metro will significantly be reduced and the metro will be hung,” Mathys said in a statement.

Mathys accused the DA of being a racist party, saying the CoCT was treating Africans and political parties led by Africans with disdain.

“Moreover, the people of Khayelitsha, Gugulethu, Langa, Nyanga, Philippi and other predominantly African residential areas are tired of the potholes, the unattended sewage spillages due to blocked drainages, and the lack of access to electricity and water.

“Furthermore, the evictions and lack of a sustainable housing development plan for the poor African masses will be the demise of the DA wherever it governs, and in the Cape metro in particular,” she said.

Mathys also accused the DA of hypocrisy, saying it was putting up banners in other towns and cities while refusing other political parties from doing the same in the Cape metro.

“That is the kind of hypocrisy the DA must be known for and as such cannot be trusted with a mandate of bringing change to the landless.

“The corruption and dishonesty of the DA-led council knows no bounds and is on steroids as they turn a blind eye to numerous breaches of elections advertisement in Cape metro with no consequences.”

READ NOW: EFF to contest all 257 municipalities in SA