ActionSA dominated the ANC in several voting districts in Johannesburg. 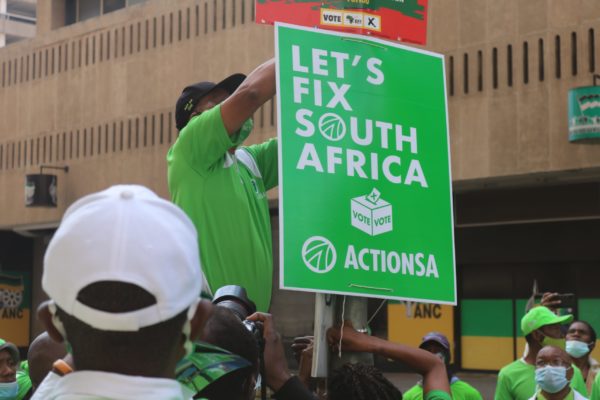 ActionSA was accused by some of its Soweto members of playing favourites when it selected PR candidates. Photo: ActionSA

As the votes trickle in, one thing is clear: ActionSA was a popular choice despite only contesting in six municipalities.

While the suburban turnout was lower than expected, elections analyst Dawie Scholtz said, “ActionSA [is] making inroads with white voters”.

It was revealed shortly after 1am that Action SA won its first voting district – Kwadukuza, Ward 15, in Stranger – with 37% of the votes, beating the DA by only one percent.

Meanwhile, the ANC managed a meagre 18% of the 52% voter turnout in Kwadukuza.

In Sandringham, The DA walked away with the majority of the votes (71%), while Action SA’s tally ended on 13% and the ANC on 7%.

ActionSA was the clear winner in Soweto as well.

Action SA also dominated the ANC at the Parkhurst Primary School (19% compared to 4%).

Scholtz said: “It seems like Action SA is taking 15-20% of the white vote in Johannesburg”.

ALSO READ: Voters having a hard time finding ActionSA on their ballots

During Herman Mashaba’s last rally, the party leader said Action SA will “will fight corruption because we have leaders that didn’t just talk about it, they actually fought it”.

He said the party would commit to lifestyle audits of senior managers and politicians.

“When I commit ActionSA to delivering the rule of law, I do so with a track record.”

He said the party represents South Africans “who are determined to set [SA] free from the restraints of a broken political system and build a prosperous, non-racial and secure future.”

A complete list of the party’s Ward Candidates can be perused here.