Coalitions: Malema says DA, FF Plus are racist for refusing to work with EFF

The EFF leader has accused both parties of adopting a racist stance against the Red Berets and other parties led by black people. 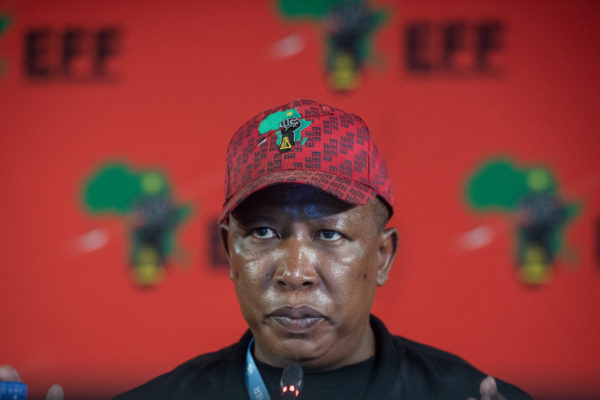 EFF leader Julius Malema has slammed the Democratic Alliance (DA) and the Freedom Front Plus (FF Plus) for saying they would not work with his party in forming coalition governments in municipalities.

Malema on Thursday hit back at the two parties and accused them of adopting a racist stance against the Red Berets and other parties led by black people.

“It’s a racist posture that they have taken that they are not going to work with black parties, but they will work with white parties,” he said, speaking at a media briefing in Tshwane.

Malema said the decision by the DA and the FF Plus might force his party – which got 10.67% of votes in Tshwane – to enter into a coalition that would prevent the two parties from taking over the capital city.

The EFF leader did not state whether the coalition with other parties would include the ANC, but he said they were willing to engage with all parties that approach them regarding coalition talks.

“It is going to force us to get into some concoction in Tshwane, because if we don’t block that racist agenda that is going to happen in Tshwane, we might have a racist municipality being presided over,” Malema said.

“So, the DA and the FF Plus are racist organisations,” he added.

ALSO READ: EFF willing to enter coalitions with all parties, but with conditions, says Malema

With more than 60 hung councils throughout the country after Monday’s local government elections, no party has managed to win an outright majority in the capital city.

The DA has been running the City of Tshwane and received 32.12% of votes. The party wants to avoid another disastrous coalition in Tshwane with the EFF, such as the one that followed the 2016 polls.

The DA will be looking to smaller parties for support, including the FF Plus, which got 7.87% of votes. The FF Plus has made it very clear that it would not work with the ANC because of its support for black economic empowerment (BEE), nor the EFF, for its radical leftist policies.

Malema said the parties that the EFF would enter into coalitions with would need to meet certain conditions. These included issues related to land redistribution, water provision, jobs, sanitation, and care of disabled people,

“We are willing to listen to everyone and we will take decisions on coalitions only when we are satisfied that they will lead to the total upliftment of our people and defeating poverty,” he said.

He also reiterated his party’s view that they were willing to make tradeoffs with other parties in order to govern specific municipalities they choose.

“We are more than ready to govern… the preferred model is that you take your municipality [and] we take our municipality. In that municipality, we supervise you through legislation. We don’t go into the executive. We become speakers, chief whips and [take part in] committees.

“And where you give the EFF a municipality you do the same. You don’t go into the executive, you go to the legislature to hold the EFF government accountable so that we don’t compromise each other [and] we always keep each other on our toes,” Malema explained.

READ NOW: Tshwane likely to have another DA-led coalition as parties try to block ANC-EFF union