Local election results show ANC can be ousted in the next polls, says Steenhuisen

The DA leader says his party is looking forward to joining forces with other parties after coalition talks, which are likely to begin as soon as Friday. 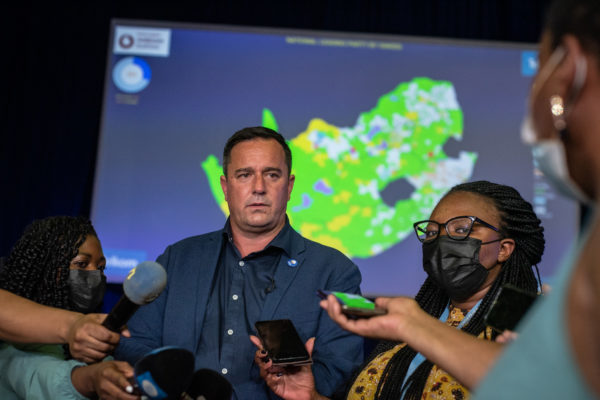 Democratic Alliance (DA) leader John Steenhuisen is optimistic that the local government elections results are a projection that the ANC can be ousted in the coming national elections.

Steenhuisen was speaking on Thursday in Tshwane at the Independent Electoral Commission’s (IEC’s) national results centre.

“The results show us that we are capable and that we can bring the ANC below 50% in the national and provincial elections, and certainly the projections from the metro areas show us very significantly just how much ground the ANC has lost. I believe that is gonna [sic] be a game changer moment in South Africa,” said Steenhuisen.

He said the only way to achieve that was through solid and stable coalitions that are likely to be formed in big metros as there was no outright winner in many of them.

“We need to get these coalitions right, because I think they are going to be the way of the future as we build new majorities in provinces and at a national level in the years to come.”

Steenhuisen said his party was looking forward to joining forces with other parties after coalition talks, which are likely to begin as soon as Friday.

ALSO READ: Tshwane likely to have another DA-led coalition as parties try to block ANC-EFF union

“I don’t want to go into unstable coalitions. The situation we have had in Tshwane over the last five years has been incredibly difficult.

“Running a minority government, moving between council meetings is very difficult to do… so I will be looking to create stable solid coalitions that will be able to go the distance and not fall apart from one council meeting to the next.”

He said that the DA had already drafted its coalition agreement document that it would share with other parties.

“Our lawyers have also spent the last two months doing a draft agreement. What we will then do is go out to the various parties that we believe are the better permutations and we will share this document with them.

“We intend to talk with those political parties and obviously they will take that document. I am sure they would like to make some input into those documents and put their views on the table and so those negotiations will hopefully start as early as tomorrow [Friday].

“We are not going to rush into knee-jerk reactions or hasty decisions. This needs to be a deliberate decision that goes the distance over the next five years.

“The metros have been characterised by instability over the last five years and what we are going out there for is a stable coalition that is gonna [sic] be able to deliver services and last the distance.”

He explained that his party was only willing to work according to certain conditions, otherwise he would be glad to sit in the opposition benches if those conditions are not met.

“Should our negotiations fail, should we not be able to put together a stable coalition based on values and principles, we will be very prepared to go and take up our sIot as the official opposition in any of those municipalities and serve the residents in that council as a strong, determined, capable opposition as we are in Parliament.”