Zikalala said he instructed Treasury to dock the KZN health MEC’s salary and donate it to NGOs involved in the fight against Covid-19. 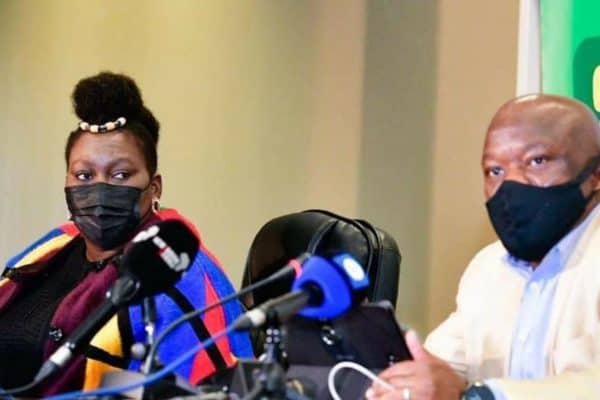 KZN health MEC Nomagugu Simelane has been ordered to apologise after photographs and videos from a gathering she recently hosted made their way onto social media and caused a furore.

According to reports,  Simelane was caught on video celebrating her birthday without a mask and socialising with guests who were captured close to each other, singing and dancing.

Protective masks were conspicuously absent from their faces during the festivities and were even seen worn on their arms in some shots.

Simelane initially said that she has been invited to a meeting, which turned out to be a surprise birthday party.

The KZN health MEC claims that she only proceeded with celebrations after being satisfied that safety protocols were observed.

KwaZulu Natal Premier Sihle Zikalala called an impromptu media briefing on Saturday to address the scandal and revealed that Simelane had been ordered to issue a public apology within seven days of his announcement.

Zikalala also confirmed that he had given Simelane an official warning in addition to instructing Provincial Treasury to dock 50% of the MEC’s salary at the next payment cycle and donate it to NGOs involved in the fight against Covid-19.

Zikalala specifically called for the funds to go to such NGOs ”in the District where the MEC is a Champion” like the Amajuba District Municipality.

The Premier spoke at length about the factors he considered before making this decision, including a “full report” that he had requested from the KZN health MEC following headlines about her gathering.

“From the report the following facts are clear,” said Zikalala before repeating that the event was a surprise birthday lunch.

“The MEC also states that the event was held at a venue which was well-ventilated and which had the appropriate social distancing and, that, guests were fully aware and were regularly reminded by both the MC and the MEC to adhere to the Covid-19 regulations,” read Zikalala.

According to the Premier, Simelane insists that the meeting was attended by a maximum of 36 people at a venue meant for 200 people and therefore provided enough circulation in compliance with the regulations.

The KZN health MEC further argues that the pictures and video were taken while guests were consuming food.

“I wish to state that since receiving MEC Simelane’s report, I have also had time to discuss it with the MEC. Having looked at the facts presented to me, it is my considered view therefore as Premier of KwaZulu-Natal that as leaders we have the burden of providing ethical leadership,” explained the Premier.

“Even though the circumstances that may have landed the KZN health MEC in this situation may have been beyond her control, however, the public still have an expectation that we should lead them ethically.”

The Premier believes that Simelane “has shown a high level of contrition” and that she did not go out of her way to violate Covid-19 regulations.

He added that Simelane deeply regrets what she called “a failure” by herself and her guests to wear masks and socially distance.

“We commend the MEC for her swift response to the matter. We also thank the KZN health MEC for her preparedness to admit her mistake and for expressing her regret that she found herself in this compromising situation.”