The road to Valhalla from the R55 collapsed, causing damage to several vehicles.

In Centurion, on the N14 East near the R511, several motorists were left stranded with flat tyres after hitting the massive potholes in the road.

A bus collision on Es’kia Mphahlele near the bridge in Mountain View caused heavy delays.

More flash floods were reported north of Pretoria. The flooding of the corner Lavender Avenue and Old Warmbad brought traffic to a halt.

Several other roads near the Apies River were also in danger of being flooded.

Watch the video of the Apies River’s water levels rising:

Road closures in Atterbury between Windsor Road and Justice Mahomed Street caused delays in the east of Pretoria.

“A tree fell on a car close to Parker Street and the road is closed in both directions,” she said. 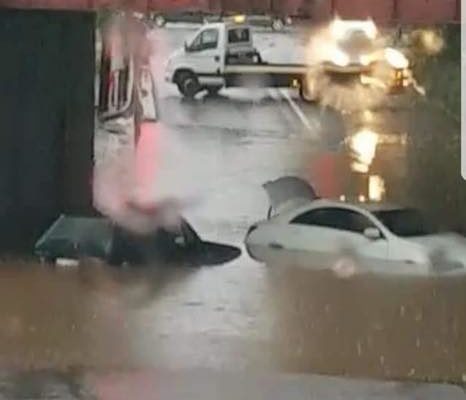 City spokesperson Selby Bokaba said that a team of technicians and electricians were deployed in areas affected by outages.

He explained that they have to take special precautions due to the unfavourable weather conditions, but that they will update customers as soon as the areas are switched back on.

“We would also like to take this opportunity to apologise to all our consumers affected by the power outages for the inconvenience caused,” Bokaba said.