Residents have expressed their anger that a cell tower will be erected in the community. The residents are unhappy at the proposed building of a cell tower in their neighbourhood and worry about the health implications.

Residents on Mopani Road in Randpark Ridge are angry at the proposed erection of a 30-metre cell tower at one of the properties in the road, Randburg Sun reports.

The residents claim they have not been consulted about the cell tower that will be erected by Atlas Towers, and are worried that it will have a negative impact on people’s health and property values. 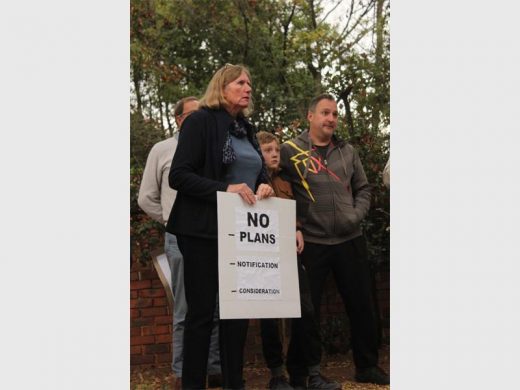 Residents are angry they were not consulted before the cell tower was to be erected.

Last week, residents organised a protest outside the property where the cell tower will be erected and confronted the family for agreeing to it.

Ward 134 councillor Wendy Alexander said affected persons are supposed to receive registered letters alerting them to the erection of the tower and that councillors themselves are not needed to give approval.

However, residents deny receiving any letters informing them about the tower.

The owners of the property where the tower will be built, who wanted to remain anonymous due to cyberbullying, told their neighbours that notices were sent out to direct neighbours but it was not their sole responsibility to do so.

“I have been fighting for years to get better cellphone coverage in this area so that was my motivation, not for financial gain.” Owner of the property (right) talks to the residents concerned about the erection of the cell tower in Mopani Road.

But Ingrid Glossop, a direct neighbour of the property where the cell tower will be built, denied that they received any notices.

She is also fuming because once the tower is built, she will be staring at it every day. She has been living in her home for over 40 years, but fears that the health impact of the cell tower will force her to move.

“We need to stand together as a community to fight this project. When I open my kitchen door, it will be there and I am so mad I could be spitting snakes. All I want is for this project to be halted,” said Glossop. Matthew van Jaarsveldt lifts his placard to show his unhappiness at the erection of the cell tower.

Her sentiments were echoed by fellow Mopani Road resident Warren Joyce, who added that although studies on the health impact of the tower are not conclusive, he is worried about waiting a decade to discover that there are health issues.

“We were never consulted about this and erecting a 30-metre tower in a neighbourhood will have an impact on our property values and we are worried about health issues as well,” said Joyce.

Another homeowner, who wished to remain anonymous, said property values will drop about 20 percent if close to the tower and by 10 percent if further away.

“Regarding radiation, I was surprised at the amount of negative scientific peer-reviewed studies. I had thought that some of the ill-effects were overblown hype but now it seems they have a scientific basis.

“My impression is that this will only get worse and that property values will fall even more as there may be a backlash. That backlash is already happening in the US and Australia.”