In the Ekurhuleni suburbs of Kempton Park and Germiston many homes and factories have been either without water or had such low water pressure that workplaces could not operate. In both instances, all fingers point to crumbling infrastructure because of alleged poor maintenance. 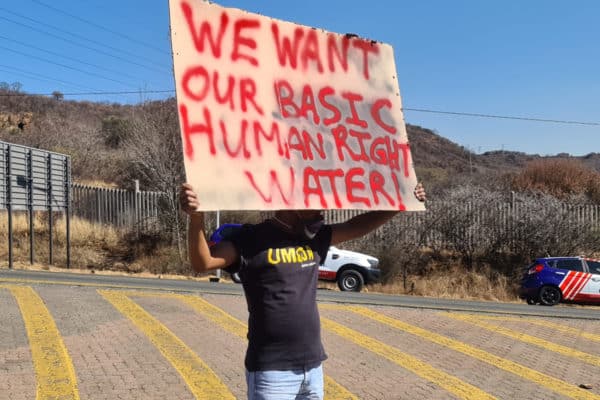 Residents from the south of Johannesburg protested outside Rand Water. Picture: Supplied

Gatvol residents from the south of Johannesburg protested outside Rand Water’s headquarters on Thursday.

Residents of Linmeyer, Tulisa Park, Risana and parts of Oakdene and Rosettenville have had to face another week without water. But they are not alone. In the Ekurhuleni suburbs of Kempton Park and Germiston many homes and factories have been either without water or had such low water pressure that workplaces could not operate. In both instances, all fingers point to crumbling infrastructure because of alleged poor maintenance.

Ward councillor Michael Crichton attended Thursday’s protest and said that this is not the first time that prolonged water outages have impacted these communities. “Just over a month ago these residents suffered a nine-day water outage.” He said the previous outages were allegedly from an explosion at Rand Water’s Palmiet pumping station that “took days to fix and then still had to fill up the Meyers Hill reservoir that supplies Johannesburg Water’s South Hills water tower, among others. This also had to fill up which also took a few days to get to a capacity that was adequate for them to supply water.” It’s a daisy chain that leaves people thirsty.

The latest incident of dry taps has lasted for seven days to date and Crichton says nobody can confirm when the problem will be resolved. Tankers carting water into the affected neighbourhoods are also erratic, added the councillor. According to Chricton, Eskom is to blame for this week’s problem. A power failure at Rand Water’s Zuikerbosch pumping station affected water supply across parts of Johannesburg, Tshwane, Ekurhuleni and even parts of Mpumalanga. Again, despite electricity being reinstated, empty reservoirs down the supply chain need to fill. It takes time.

ALSO READ: Why Rand Water’s maintenance is a necessary evil

“Rand Water will continue to monitor the reservoir levels throughout the night and will inform its customer (Johannesburg Water) when there is sufficient water in the Meyers Hill reservoir. Thereafter, Johannesburg Water will begin pumping water into South Hills tower and restore water supply to affected areas,” said Rand Water spokesperson Justice Mohale. “Rand Water would like to urge consumers to use water sparingly and apologises for any inconvenience caused.”

Simon Lapping, the DA’s spokesperson on energy and water, says that the constant issues with essential infrastructure points to incompetence and years of poor maintenance. “The value chain is truly botched-up,” he says. “If it’s not Eskom or municipal infrastructure that fails citizens, it’s the state’s other utilities like Rand Water that sucker punch residents and industry.”

In a statement, the Ekurhuleni metro said that water users in the high-lying areas of Ekurhuleni can expect low water pressure “as technicians implement measures to curb the effects of ongoing restrictions to the city’s bulk water supply.” The statement goes on to say that over the past week, residents and businesses in various parts of the city have experienced water supply interruptions after Rand Water implemented emergency protocols to salvage its reserves that had severely dipped due to high water demand.”

Lapping alleges that Rand Water’s distribution network is under severe pressure with water demand consistently exceeding supply. He feels that there needs to be better planning and co-ordination between municipalities, Rand Water and Eskom. “Especially considering the recent increased demand due to population densification. The existing water systems are inadequate for the number of residents in Ekurhuleni.”

According to Zweli Dlamini, spokesperson for the City of Ekurhuleni, a decision has also been taken to reduce the output at reservoirs where the supply has not been affected. “This is in response to the call for municipalities across Gauteng to reduce the demand on the system to allow Rand Water to recover.” He added that “consumers in areas that are not affected are also encouraged to use water sparingly by prioritising only the essential water-reliant tasks and using as little of the resource as possible. Water will continue to be supplied in areas with no water through stationary tanks and roving water tankers.”