The brown, slimy water can't be used for drinking, and residents rely on water trucked in every second week. 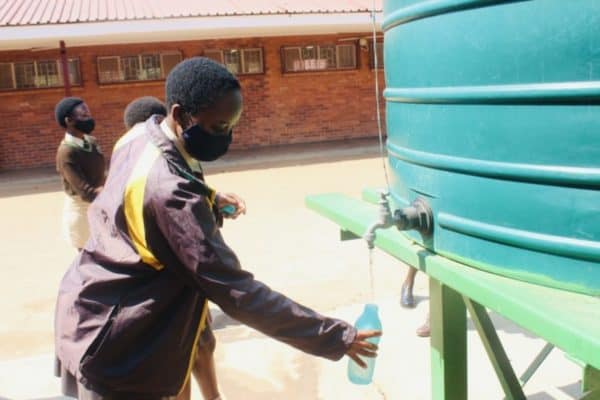 Learners at Ratshepo High School in Temba rely on water trucked in every second week for drinking and cooking. The community of Hammanskraal wants the government to find a permanent solution to the water crisis in the area. Photo: Mosima Rafapa/GroundUp

Hammanskraal families say they can’t use the “brownish” and “slimy” water coming out of their taps.

The commission was accompanied by City of Tshwane Mayor Randall Williams, MMC for Utility Services Phillip Nel, officials from the Department of Water and Sanitation and members of Hammanskraal Residents Forum (HRF).

This was in response to the City’s decision to shut down the Temba plant on 25 August after it reported that the quality of water had deteriorated due to equipment failure.

Hammanskraal households were without water for a week. The water has since been restored. But residents say water supply needs a long-term solution.

The commission’s provincial manager, Buang Jones, said that the lack of provision of clean and drinkable water is “an ongoing violation” of residents’ rights. He said a report on their findings will be released in the coming weeks.

In 2019, SAHRC declared that the water was unfit for human consumption after the Council for Scientific and Industrial Research’s (CSIR) independent sample analysis.

In February 2020, we reported on the community in Mogogelo Village that had been without tap water for over 12 years and resorted to wheelbarrows to fetch buckets of water from residents who had sunk their own wells.

While traveling to the plants last month, Jones and the team first visited Ratshepo High School in Temba.

Learners and staff members were seen washing their hands from taps, but they said the water couldn’t be used for drinking and they rely on water trucked in every second week for drinking and cooking.

Matlakala Tshabalala of the school’s feeding scheme said, “Even after boiling the water, there wasn’t much difference. You could take out the foam from the kettle. It was brown, the kettle’s colour also changed and it was smelly.”

Resident Pelican Baloyi said, “The water has always tasted salty and unclean. The only thing we can do with the water is bath and do laundry. You can’t drink it, you can’t even cook with it.

“It’s really sad that other people have no other option but to drink tap water because they cannot buy their own water.”

For the past 16 years, Hammanskraal families have had to contend with contaminated water caused by the aging infrastructure at the water treatment plant discharging sludge into the Apies River and Leeuwkraal (Temba) Dam.

The dam provides the Hammanskraal community with water.

“People’s lives are at stake. We are very worried because of the political instability that we are seeing. It’s election season.

“If there’s a new administration, we will be back to square one,” said Tumelo Koitheng, chairperson of Hammanskraal Residents Forum.

Koitheng said the water trucks supplied by the City were not enough.

“There is no system in place to dispatch the trucks. With refuse collection, there’s a schedule, but not with the water trucks.”

Tshwane metro spokesperson Lindela Mashigo said, “There were 24 tankers providing water in Hammanskraal. Of these, 19 were allocated to Wards 8,73 to 75 and 49 and another five were allocated to health facilities.”

Mashigo did not comment on the allegations that water trucks did not reach some areas.

Meanwhile, Mayor Williams said the water crisis in the area could have been avoided had the then administration dealt with challenges identified in a 2004 report.

The report highlighted the need to upgrade deteriorating infrastructure in order to sustain population growth which has since doubled.

“R300 million was made available to upgrade the Rooiwal Waste Water Treatment. Phase one of this work is underway and at 58% completion. Finalisation is expected in October 2022.

“However, as this work takes place we must keep the plant running, which is challenging,” he said.