In a separate incident, two people died when a car rolled in Vaalbank, KZN. 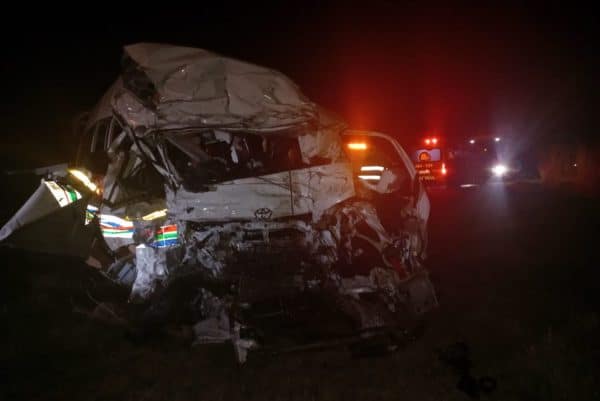 Seven men were killed when the taxi they were in crashed into a truck on Sunday morning. Photo: Twitter/@_ArriveAlive

Seven men died in a horrific head-on collision between a taxi and a truck on the R545 between Bethal and Kriel, in Mpumalanga, in the early hours of Sunday morning.

The men, who were travelling in the taxi, were between the ages of 25 and 35.

ER24 paramedics arrived on the scene at 3am to find the truck and taxi off the side of the road.

The bodies of five of the men could be seen inside the wreck of the taxi. The other two bodies were only found after the fire department started the process of extraction.

All seven men were declared dead on arrival. The driver of the truck was unharmed in the incident.

According to Arrive Alive, police were on the scene for investigations.

Last night Kwazulu Private Ambulance Service responded to the Vaalbank near Vaalbank for reports of a collision.

Emergency services arrived to the scene on the R69 and found a vehicle that had lost control and overturned multiple times. Arrive Alive said witnesses on scene reported that the occupants of the car were thrown out of the vehicle while it was rolling.

The patients were treated on scene before being transported to hospital.

“Sadly the critically injured patient succumbed to their injuries at hospital, despite the efforts of the paramedics and hospital staff,” said Arrive Alive.