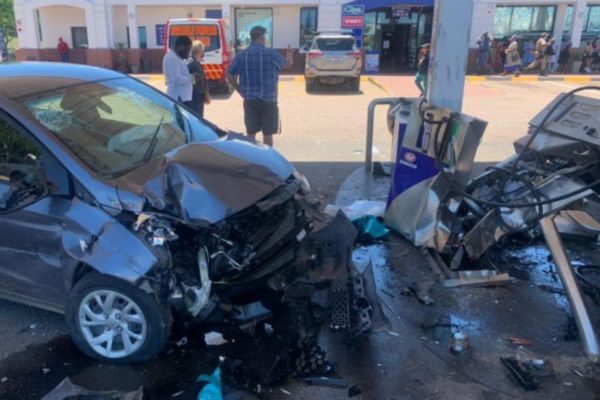 The car that crashed into two other vehicles and a petrol pump in KZN. Photo: Supplied to Zululand Observer

A routine visit to the Engen One Stop on the N2 highway between eSikhaleni and Empangeni in KwaZulu-Natal became a near brush with death for those injured in a car crash on Sunday.

According to Zululand Observer, a car drove into the petrol station’s forecourt at a high speed, ramming into a car before bouncing into another.

Only a petrol pump was destroyed in the accident, and no deaths were reported.

Three people were however injured, and were transported to hospital by a private ambulance.

City of uMhlathuze Fire and Rescue were at the scene, and a police investigation is underway, it was further reported.

Watch the terrifying footage, courtesy of Zululand Observer, below.