When he was first asked about it, he said as far as he knew, everybody was affected by it. 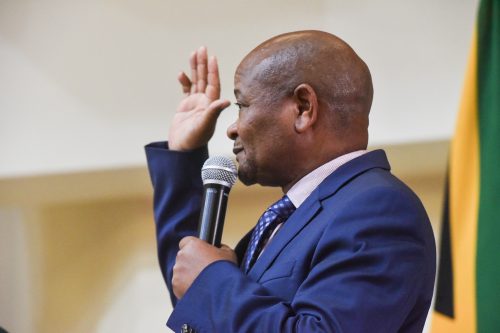 Minister of Public Service and administration Senzo Mchuni during the swearing in of the new Presidential Cabinet at the Presidential Guesthouse in Pretoria, 30 May 2019. Picture: Jacques Nelles

Public Service and Administration Minister Senzo Mchunu has dodged a question on whether Eskom’s rolling blackouts currently casting the country in darkness is affecting his official residences.

Mchunu was addressing the media on Monday on the new ministerial handbook when the question arose.

When he was first asked about it, he said as far as he knew, everybody was affected by it.

When asked explicitly whether he had ever experienced a blackout in his official residence and whether he had a generator, and if so, who paid for it, he failed to give a direct answer.

Mchunu said his private residence in KwaZulu-Natal does not have a generator.

“I may have wished to have one, but I don’t have one.”

He said his mother’s home, where he grew up, also does not have a generator.

“My official residence – in Cape Town – I don’t know, to be exact, whether there is a generator there. I would [have to] make an inquiry. If, therefore, the issue of whether I pay for it or not doesn’t arise.”

Again, it was pointed out that he was asked whether he had experienced a blackout in his official residence, and that he had not answered the question.

“Well, I think I attempted to answer the question. We are equally affected by load shedding. Load shedding doesn’t know any minister,” Mchunu said.