The call was echoed by Southern African Agri Initiative's Theo de Jager, who called it the 'most effective strategy'. “It is time that we encourage our rural communities to fight back and arm themselves,” these are the words of AfriForum’s head of community safety Ian Cameron, who was speaking during a media briefing held by the organisation and streamed on social media on Wednesday.

“Trusting in a president like Ramaphosa and a government like the ANC will simply mean more carnage,” he added.

This after a presentation on crime trends on farms and smallholdings observed by his organisation during the lockdown.

Cameron alleges that there was a serious increase in the frequency of farm attacks following the move to Level 3. 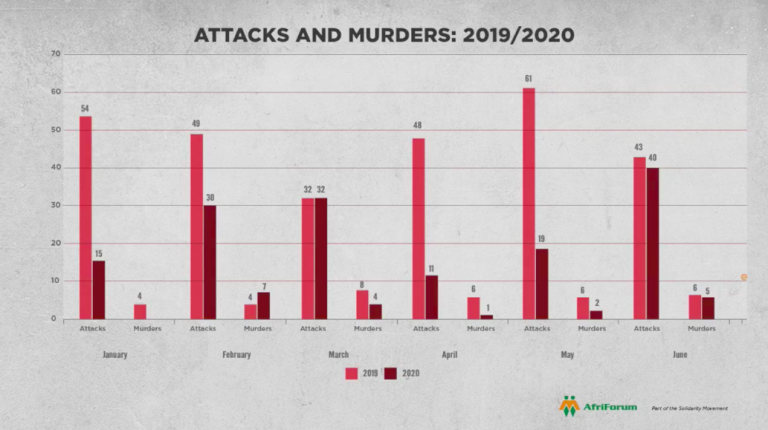 The presentation was made to support AfriForum’s launch of a campaign against farm murders as well as their announcement that they would be submitting an open letter to President Cyril Ramaphosa on what they call the “scourge of farm attacks”.

Reading the letter, Afriforum policy head Ernst Roets invoked the names of the various women murdered in recent months, including the likes of Tsegofatso Pule, Naledi Pangindawo and Altecia Kortjie, and recalled the actions listed by the president in response to gender-based violence during his 17 June national address.

ALSO READ: The whole of SA must be repossessed and redistributed, says Shivambu in fiery lecture

Roets equated the country’s gender-based violence crisis to their cause of fighting against farm attacks, even going so far as calling it a pandemic.

He cited an alleged amount of 40 farm attacks resulting in five murders during the June 2020 period and additional four farm murders the following month. He named each victim and case, including the recent killing of Julian Stobbs.

Roets listed a total of demands to government on behalf of AfriForum, including instructing the Hawks to prioritise such crimes, establishing an intelligence-gathering framework for farm attacks and to revise the national rural safety plan.

Theo de Jager from the Southern African Agri Initiative (SAAI) – a network structure for family farmers – added to this list of demands by calling for a commission of inquiry into “this crisis”.

“Famers must make sure that they are armed and that their firearms are well maintained. There is nothing more effective at this stage than fighting back,” said De Jager.

He further called for farmers to get involved in the self-established security and policing forums in their respective areas.

Watch the full briefing below, which begins with a short mini-documentary about the 2010 murders of members from the Potgieter family, who lived on a farm.

Roets promised that the organisation planned on releasing similar films in future.

AfriForum will announce a campaign against farm murders during this media conference. The organisation will also present a mini documentary about the murders of Attie (40), Wilna (36) and Wilmien Potgieter (2) from Lindley who were killed on their farm in 2010 and will publish an open letter to Pres. Cyril Ramaphosa detailing practical steps government should take to combat farm murders.

Posted by AfriForum on Wednesday, 8 July 2020