Supra Mahumapelo lays complaint after being booted from meeting

Mahumapelo's eleventh-hour fightback comes after he was asked to leave a virtual parliamentary meeting on Monday. 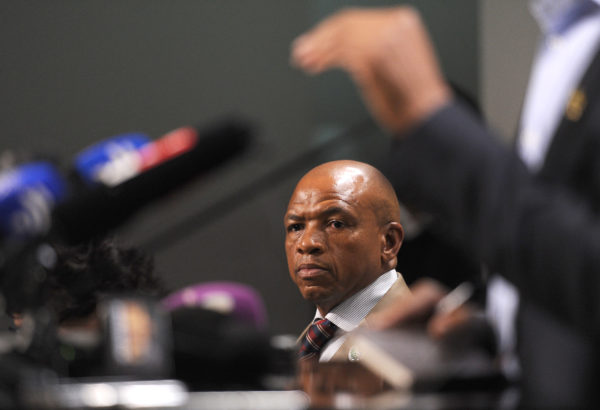 Former North West premier Supra Mahumapelo during a media briefing to announce his resignation at Luthuli House on May 23, 2018 in Johannesburg, South Africa. Mahumapelo announced that he is taking "early retirement" as premier of the North West. (Photo by Gallo Images / Netwerk24 / Felix Dlangamandla)

Mahumapelo’s eleventh-hour fightback comes after he was asked to leave a virtual parliamentary meeting on Monday.

The meeting dealt with the governance challenges in the once-troubled province.

The ad hoc committee on the section 100 intervention in North West met with the inter-ministerial task team and National Treasury for an update.

A defiant Mahumapelo said he hoped Dodovu’s decision was not influenced by the formal objection he lodged with the National Council of Provinces against Dodovu chairing the committee previously.

In a new letter seen by News24, Mahumapelo slammed Dodovu on Monday, accusing him of contravening the rules of Parliament for asking him to leave the virtual meeting.

In part, the letter reads: “Among other things, he was part of the so-called ‘SupraMustFall Campaign’ in 2018 under the banner of the so-called ‘Revolutionary Council’. I am still awaiting a response in this regard from the NCOP Chairperson for me to address the NCOP on this matter.”

During the opening of the virtual meeting, Dodovu requested that Mahumapelo leave, saying he was not invited. The two have long been at loggerheads as they both hail from North West.

Mahumapelo continued in his letter: “I requested a chance to speak, and I brought the following to the attention of the chairperson: 1. Every member of Parliament has a right to attend a meeting of any committee in Parliament as long as they don’t vote. 2. It is not the sole discretion of the chairperson to decide whether another MP can be present in a meeting or not. It is better to put such a question to the committee. The conduct of the honourable Dodovu is in contravention of rule 185 of Parliament.”

“For me, it is clear that honourable Dodovu undermined the rules of Parliament deliberately because I attempted to bring this to his attention, and he ignored the advice. He also took an arbitrary decision and thereby undermined the committee he was chairing by not at least, at a minimum, putting the matter of my presence in the meeting to the committee for a decision,” he said.

Mahumapelo said Dodovu’s conduct showed an element of abuse of power. This, he said, hindered his rights as an MP to participate in the meeting.

“My humble submission is that necessary steps and/or remedial action be invoked in terms of the rules of Parliament against honourable Dodovu. His action is tantamount to impeding my constitutional rights as a public representative and a member of Parliament,” the letter read.

In May 2018, the embattled North West government was placed under administration. A task team has been deployed to try to resolve the political impasse in the province.