The EFF leader has drawn crowds on the campaign trail with just over six weeks to go to local government elections. 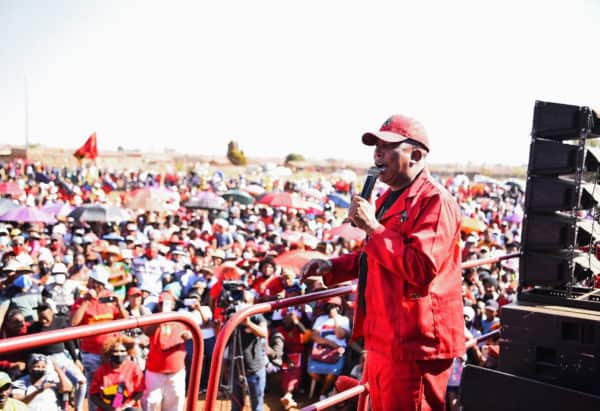 On the electoral campaign trail in Sedibeng, Gauteng, on Tuesday, Economic Freedom Fighters (EFF) leader Julius Malema once again punted what his party is offering voters in this election year.

He was dismissive of his former party, the ANC, saying neither its Zuma nor Ramaphosa factions could be trusted to redeem the country, as the entire ruling party “is corrupt to the core”.

“We need to use our brains. Stop this thing of saying you come far with the ANC.

“The ANC is dead. It is only thieves that are left. You [the ANC] are even stealing food parcels.”

Malema was critical of the idea of poor people in townships being asked to pay for municipal services. He said the rich would have to subsidise the poor.

“They give you SASSA [SA Social Security Agency] money, then they come back and demand money of water and electricity from you.”

He promised to do away with the corruption-riddled tender system as it currently exists should the EFF come to power.

Malema was equally dismissive of the concerns of white people around nationalising the land, a core policy principle of the EFF since its inception.

“Once you are sheepish and don’t know where you stand, whites will play with you. This our property, it is not private. Your ancestors [white people] stole this land.

“The EFF is going to take this land. Even if we die today, the next generation will continue the struggle.”

He promised jobs to both the qualified and unqualified, but was also highly critical of ANC cadre deployment, asking those who were hired by the ANC to “show us their qualifications”.

Malema was also unhappy about the state of the Vereeniging township, describing it as a “dumping area”.

“We must clean this place and demonstrate through action.”

The EFF have called for an immediate move to alert level 1 on Covid lockdown regulations so that they and other parties can campaign freely, with Malema earlier this year already calling on his followers to defy curbs on the sizes of gatherings.