‘SA not a failed state,’ say ministers ahead of mooted meeting with hostage takers

Despite the turmoil on Thursday night, Thandi Modise says she wants to meet the military veterans again to find solutions to their grievances. 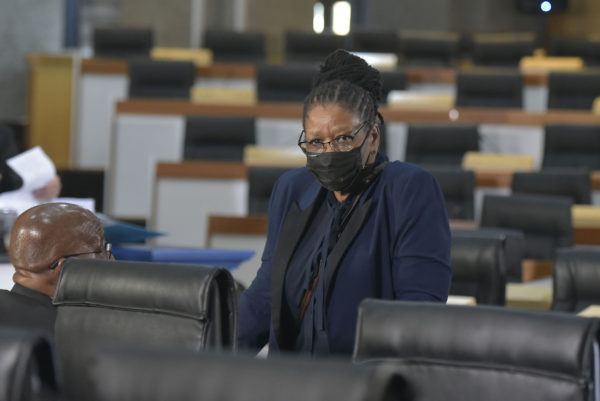 After being held hostage in Tshwane on Thursday night, Minister in the Presidency Mondli Gungubele and Defence Minister Thandi Modise were at pains to stress that South Africa is not a security-heavy state and ministers trust citizens to sit and talk with them.

Without admitting whether government was embarrassed, Gungubele on Friday said the situation at the St George’s Hotel in Centurion was not acceptable.

“If we are embarrassed because we trusted our people, maybe that’s a consequence we have to live with,” said Gungubele.

There have also been suggestions that there were lapses in security as the ministers met with the disgruntled military veterans, just days after members of the Liberation Struggle War Veterans (LSWV) breached Luthuli House.

ALSO READ: Mondli Gungubele thanks police for rescuing him from ‘untenable’ hostage situation

Gungubele, however, dismissed these security concerns.

“We were not meeting these people for the first time. They had not done this before, there was no reason to suspect they would do what they did,” he said.

The hostage situation with the ministers comes just months after the riots that crippled parts of Gauteng and KwaZulu-Natal in July.

Despite this, Modise refuted allegations that South Africa is a failed state.

“I don’t think so. I think South Africa is being put to a test. Even though police came in yesterday to break up the hostage situation, so far we have been able to hold it tightly. For the state to not go overboard in the use of force is a plus for democracy,” said Modise.

The ministers also stressed that the incident was not violent.

“We were there against our will, but it was not violent,” said Gungubele.

“We did not feel like our lives were in danger [but] we were unhappy about being refused to leave when we thought the meeting had aborted,” added Modise.

Despite the turmoil on Thursday night, Modise says she wants to meet the military veterans again to find solutions to their grievances.

“We will be more careful when we meet and make sure we are not taken hostage again,” she said.

The veterans are demanding R4.4 million in reparations for a each veteran, including a housing allowance, for their children and wives to have medical aid benefits and children to be put through tertiary education.

They refused to release the government officials at St George’s Hotel until their demands were met. They called for a meeting with President Cyril Ramaphosa, after expressing their unhappiness that Deputy President David Mabuza was not at the meeting on Thursday night.

Gungubele said it is “not fair” to expect the president to be wherever he is expected.

“The [military veterans] were not prepared to accept that … They then said they could not proceed with us,” he said.

It was at this point that the ministers realised that the doors at the venue were being locked.

Although the ministers had their own personal protective services inside the venue, Modise said “they weren’t tempted to get involved in the fray”.

When asked what measures the police took to rescue the ministers, Modise admitted tables were turned upside down and loud bangs were heard, but could not confirm an allegation that stun grenades were used.

“Whatever the police used would have been within the permissible range of what they can use,” she said. State of Disaster extended as Covid-19 cases hit 1,000 mark since October
3 days ago
3 days ago

State of Disaster extended as Covid-19 cases hit 1,000 mark since October
3 days ago
3 days ago