Looting in Gauteng likely to spread to Tshwane

Chaos started in different parts of Johannesburg, by Monday, violence had started spreading to other areas, including Vosloorus and Alexandra. 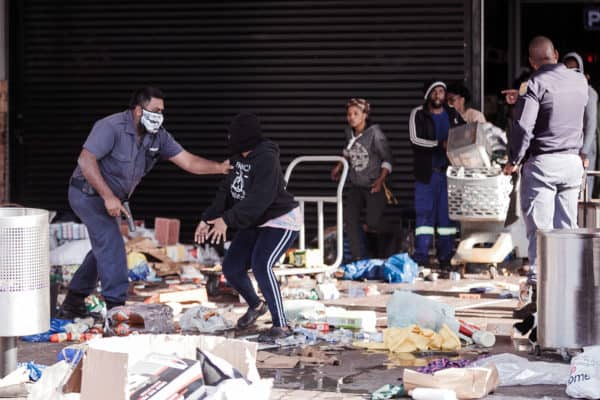 A South African police officer holds his gun while arresting a suspected looter vandalising the Springfiled Park Mall in Durban on July 12, 2021. Several shops and businesses are damaged in Durban, following a night of violence. - South Africa's army said Monday it was deploying troops to two provinces, including its economic hub of Johannesburg, to help police tackle deadly violence and looting as unrest sparked by the jailing of ex-president Jacob Zuma entered its fourth day. (Photo by STRINGER / AFP)

While the mass looting and riots seen in other parts of Gauteng have not yet spilled over into Tshwane, the City had started to prepare itself.

Looters took to the streets on Sunday in different parts of Johannesburg, causing chaos. By Monday, the violence had started spreading to other areas, including Vosloorus and Alexandra.

Except for minor incidents of road blocking at the R101 in Hammanskraal and Tsamaya Road in Mamelodi, the City of Tshwane has not yet descended into a state of anarchy. However, the City and shop owners have started taking precautions in anticipation of widespread looting and riots. News24 observed the closing of several malls and shopping centres on Monday.

Meanwhile, the City said that the Tshwane Metro Police Department would support SAPS and SANDF operations against lawlessness.

“The Tshwane Metro Police Department (TMPD) is on high alert to monitor any development of brazen lawlessness and looting across all regions of the City,” the City said in a statement on Monday afternoon. “TMPD members have been deployed and are ensuring high visibility, particularly in volatile areas such as the Pretoria CBD and Mamelodi.”

The City welcomed the announcement by the South African National Defence Force (SANDF) that soldiers would be deployed to assist police.

“Our TMPD teams are currently working with the South African Police Service (SAPS) to bolster efforts to combat and contain the lawlessness that flared up in recent days. “TMPD will operate within the national joint operational plan, which will also guide further deployment and operations.”

ALSO READ: Gauteng, KZN violent protests could spill over to other provinces

The City noted that areas of concern included major highways in and around Mamelodi, Hammanskraal, as well as several parts of the CBD. Major routes into the City from Mabopane, Soshanguve and Ga-Rankuwa were also being monitored. Earlier on Monday, News24 reported that an elderly Katlehong man had been shot dead during looting and unrest on the East Rand.

The man was shot dead while residents in the area continued looting shops at the centre. It is not known who shot the man. According to police, over 200 people have been arrested since the unrest started in KwaZulu-Natal. Six people have also been confirmed killed.

The riots in KwaZulu-Natal were originally linked to the incarceration of former president Jacob Zuma, who started serving a 15-month sentence for contempt of court last week. The subsequent spread of the riots and looting in KwaZulu-Natal and Gauteng has not directly been linked to loyal supporters of Zuma.

Zuma now ‘irrelevant but he’ll battle on’, says analyst
3 days ago
3 days ago

Zuma now ‘irrelevant but he’ll battle on’, says analyst
3 days ago
3 days ago