The chair says the appointment of the acting secretary may be terminated earlier if the investigation is finalised sooner. The chairperson of the commission of inquiry into state capture, Deputy Chief Justice Raymond Zondo, has appointed Peter Pedlar as the commission’s acting secretary after Dr Khotso De Wee took special leave from the position.

The Chairperson has appointed Mr Peter Pedlar as Acting Secretary of the Commission for the period 22 Jan to 28 Feb 2019. Should the investigation against Dr De Wee be finalized earlier than 28 Feb, Mr Pedlar's appointment may be terminated earlier. #StateCaptureInquiry pic.twitter.com/xafX0PbKwD

De Wee went on special leave last week pending the commission’s investigation into allegations that he was paid by Bosasa.

The company’s former COO Angelo Agrizzi told the commission on Monday that De Wee had allegedly been part of a group that Bosasa bribed in respect of a 2013 tender at the department of justice and constitutional development during a time when he served as COO at the department.

Agrizzi said 2.5% of all payments received from the department of justice and constitutional development in respect of the 2013 tender was handed to a politically connected consultant, Sesinyi Seopela, for distribution to officials, and amounted to R15 million, with De Wee among the beneficiaries included.

In a statement issued by Zondo in the wake of appointing an acting secretary for the commission, the chair said Pedlar’s term would run for the period January 22 to February 28.

“Should the investigation into the allegation made against Dr De Wee be finalised earlier than 28 February 2019, Mr Pedlar’s acting appointment may be terminated earlier,” Zondo said in the statement. 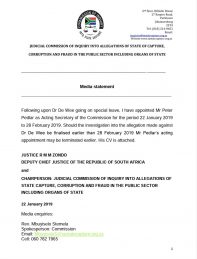 “He also contributed to the writing of the OECD Guidelines on Corporate Governance of SOEs [state owned entities], which was first published in 2005.”

Pedlar has worked in the private, parastatal, and public spheres in the manufacturing, IT, financial services and research sectors, with over 20 years of experience as CFO, COO and acting and deputy CEO.

According to his CV, he has a Masters in Management of ICT (Policy and Regulation) with the Wits Business School, which is incomplete, and other certificates and qualifications.