The former ANC man claims that ANC MPs at the time knew about the concerns around Bosasa. 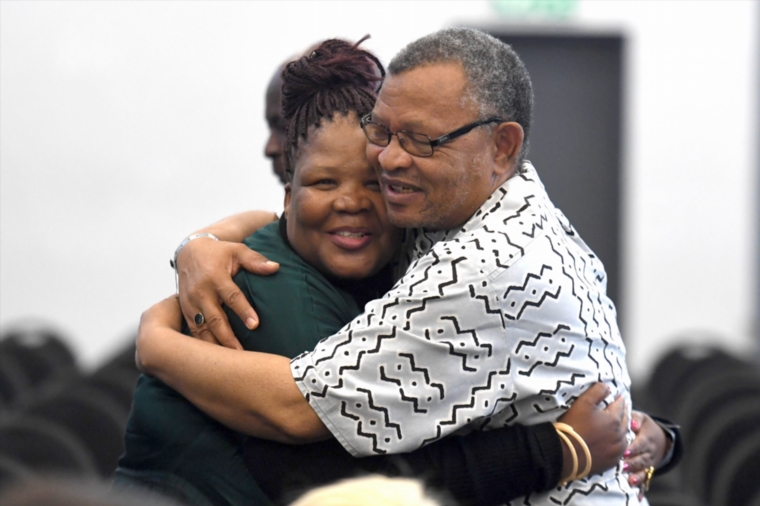 Vytjie Mentor and Dennis Bloem at the state capture commission of inquiry on 24 August 2018 in Johannesburg, South Africa. Former president Jacob Zuma is going to be dragged deeper into the centre of state capture rot as three witnesses who will appear before the Zondo commission will implicate him in lobbying for Gupta companies to receive government business. (Photo by Gallo Images / Netwerk 24 / Deaan Vivier)

Former chairperson of the parliamentary committee on correctional services Dennis Bloem told the commission of inquiry into state capture on Friday that following committee meetings in which he would express his opposition and concerns over Bosasa being awarded tenders at the department of correctional services (DCS), the ANC chief whip at the time would call to reprimand him.

Bloem, who served in the role of chairperson from 2004 to 2009 while he was an ANC MP, is no longer a member of the party, and is now a spokesperson of the Congress of the People (Cope).

He told the commission the chief whip at the time was Mbulelo Goniwe. Goniwe served in this role from 2004 to 2006.

According to Bloem, after the Tuesday portfolio committee meetings in which he would express his concerns over Bosasa and the tenders at the DCS, the ANC chief whip would on Wednesday afternoon call him to his office and tell him that his continued opposition to the controversial company would lead to his removal.

Before the tea adjournment on Friday, Bloem told the commission the governing party had its own parliamentary study group that held meetings attended by the then minister of correctional services, Ngconde Balfour, and Goniwe.

At these meetings, Bloem said, concerns around tenders awarded to Bosasa by the DCS would be raised.

Former Bosasa COO Angelo Agrizzi’s marathon testimony at the committee alleged that under Linda Mti as commissioner and Patrick Gillingham as COO, the DCS became a conduit for tenders solely awarded to Bosasa (now African Global Operations), to the exclusion of other potential bidders.

Bloem told the commission that “people were aware of what was going on”.

The former committee chair said the only thing that was said at the ANC parliamentary study group meetings was that “comrades, you must work together, don’t fight, because this is an ANC government” and that the then chief whip would say he would look into the matter.

He said that during his time as chair of the committee, the parliamentary structure raised a number of concerns with Balfour, however, these were “never addressed”.

“His [Balfour’s] attitude was ‘let us leave the department to sort out those problems, let us not interfere in the operations of the department’,” Bloem told the commission.

He said minutes and recordings of committee meetings could show that these concerns around Bosasa were raised several times with Balfour and Mti.

Bloem said the committee on two occasions rejected a budget presented by the DCS when it became aware that its authority was being undermined by the department.

This, he said, led to him being called to the chief whip’s office where he was reprimanded and told: “This is an ANC government, you can’t do this, you are putting the ANC in a bad light.”

Bloem claimed that a number of ANC members would approach then party secretary-general (SG) Kgalema Motlanthe to complain about his opposition to Bosasa.

“[Motlanthe would ask them], but are you saying the opposition must ask these tough questions he (Bloem) is asking?” Bloem said, adding that the former SG would say the committee was doing its work accordingly by ensuring that the minister and the department were called to account.

Bloem further claimed that Motlanthe rejected calls for him to be removed as the committee’s chair.

Apparently, some of the party’s members would label him the opposition for asking the tough questions.

Concerns around Bosasa were raised with the then chair of the ANC parliamentary caucus, Vytjie Mentor, who served in the role from 2004 to 2008, Bloem told the commission.

He alleged that all of the ANC’s members of parliament knew about the concerns around Bosasa, but nothing was done. However, he said Mentor had met with Balfour to address these concerns.

Bloem said it was “quite clear” to him that Mti was protected by Balfour, saying he came to this conclusion because every time the two would appear before the committee and the former commissioner was asked difficult questions, the former minister would interject and answer on Mti’s behalf.

He added that when he would bump into Balfour, the former minister would ask him not to give Mti a difficult time because he was an experienced official.