The witness says making the changes needed to combat financial crimes, investigate potential corruption and repatriate stolen funds will not be easy. 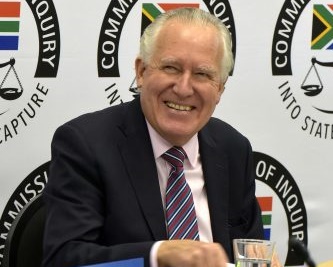 House of Lords peer and anti-apartheid activist Peter Hain on Monday made several recommendations to the chairperson of the commission of inquiry into state capture, Deputy Chief Justice Raymond Zondo, for his consideration, and which the South African government could implement to combat financial crimes and corruption in light of state capture.

At the end of this testimony, Lord Hain read a summary of his recommendations to the commission.

Lord Hain said that first, the country should increase transparency around beneficial owners of corporate companies and strengthen the programme for auditing and the due diligence conducted by banks and professional enablers “to ensure they fully comply with anti-money laundering legislation policies”.

Earlier he had told the commission that enablers include lawyers, auditors, accountants and estate agents.

Second, there should be an increase in the sharing of data between banks and professional enablers and between banks and the state “so that there is greater visibility around the risk profile of customers and transactions”, Lord Hain recommended.

Third, additional penalties should be created both at an organisational level and at an individual level for banks, their management and professional enablers “who fail to self-police”, he said.

South Africa should join the Extractive Industries Transparency Initiative (EITI) “so that there is greater transparency and accountability around the operation of those industries and consider extending those to other sectors”, Lord Hain told Zondo.

His fifth recommendation was that South Africa should increase the transparency around the Black Economic Empowerment programme “to ensure that the legitimate aims of this initiative and important aims are not subverted for the personal gain of a minority of criminals”.

The country should ensure that existing anti-money laundering legislation is properly utilised, as well as legislation targeting corruption.

He added that additional legislation should be implemented “to hold public officials to account and assist with the recovery of assets coupled with increased funding for the regulators”.

The latter funding could come from the state but could also be done “by private corporation levy”, Lord Hain suggested.

His seventh recommendation was that South Africa should fully implement all the Financial Action Task Force recommendations, which are measures countries should implement to combat money laundering, among other crimes.

Lord Hain had earlier said that Hong Kong, the United Arab Emirates (UAE) and India should cooperate with South Africa in bringing those alleged to be at the centre of state capture to book, namely the Gupta brothers.

He said though it was “a positive move forward” that South Africa and the UAE now have a legal mutual assistance agreement in place as well as an extradition one, the Guptas still have not be repatriated and are allowed to spend billions – “specifically in Dubai” – which reduces the money that South Africa can recoup from them.

Evidence leader at the commission, Advocate Paul Pretorius commented that it appears as if the level of cooperation in this regard is lacking.

Lord Hain said this suggests that the UAE could possibly be “willfully” sheltering the Guptas.

He commented that it was astonishing that the Guptas have still not be extradited to South Africa “given everybody knows where they are”.

Stating his recommendations in conclusion of his testimony, Lord commented that making the changes needed to combat financial crimes, investigate potential corruption and repatriate stolen funds “will not be easy”.

“However, the people of South Africa deserve better than the obscene looting and devastation caused by state capture and I hope that the recommendations referenced in this report will also be recommended and considered by your commission and then implemented by the government because I think, as a friend of South Africa and as a former South African myself prior to my enforced exile a long time ago, South Africa had and still does have a corruption near-death experience that must not be repeated and must be eradicated if the country is to survive and prosper in the future, and if the values of the freedom struggle are to be realised. I thank you.”