A good day in the pool for South Africa, as well as in the bowls but it didn't go so well on the fields. 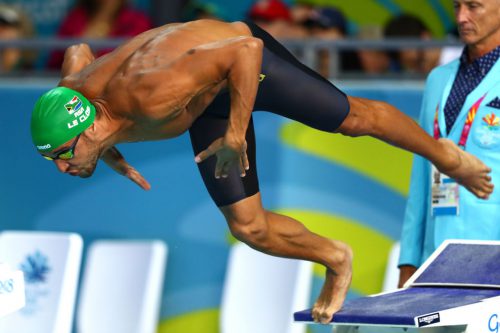 Chad le Clos of South Africa competes during the Men's 50m Butterfly Semifinal 2 on day one of the Gold Coast 2018 Commonwealth Games at Optus Aquatic Centre on April 5, 2018 on the Gold Coast, Australia. (Photo by Clive Rose/Getty Images)

While triathlete Henri Schoeman was the only medallist on Thursday’s opening day of competition, a number of South African athletes stuck up their hands in preliminary rounds of their events at the Commonwealth Games in Gold Coast.

Both athletes progressed among the medal favourites for Friday night’s sprint final.

Though most of the SA swimmers in early action failed to progress beyond the heats and semifinals of their disciplines, Tatjana Schoenmaker was in superb form.

After setting a personal best of 30.92 in the 50m breaststroke heats in the morning session, just 0.09 outside Penny Heyns’ long-standing African record, she went on to clock 31.01 in the penultimate round, progressing as the fifth fastest qualifier for Friday’s final.

It was a tough day out, however, for the rest of the SA contingent.

On the cycling track, the SA men’s squad finished fifth in the 4 000m team pursuit in 4:11.71, while the national women’s squad ended sixth in 4:51.22, with both teams eliminated before the medal contests.

Both SA hockey teams got off to wobbly starts in their first pool matches, with the women’s side falling 2-0 to a fancied England outfit and the men’s squad going down in a 4-2 defeat to Scotland.

And on the badminton court, the national mixed team lost 5-0 to Australia in their opening Group C match.