SA's fastest man delivers a solid performance in Potch, but the evergreen Sunette Viljoen is stunned in the javelin.

Though he admitted he was not yet in his best shape, Akani Simbine said he was satisfied with his early season form after opening his campaign with a solid victory in the men’s 200m race at the ASA Grand Prix meeting in Potchefstroom on Wednesday night.

Having anchored the SA 4x100m relay team to victory at the opening leg of the Grand Prix series in Bloemfontein last week, Simbine clocked 20.39 seconds for a convincing win in his first individual race of the year at the second and final leg.

Also set to focus on the 200m event at next week’s ASA Senior Championships in Germiston, the national 100m record holder was not expected to compete over the shorter distance until the Diamond League meeting in Shanghai next month.

And with his attention focussed on a medal charge at the World Championships in September, the speedster said he was in no rush to be hitting top speed.

“I don’t want to be sharp right now and then feel like my legs are falling off closer to World Champs,” Simbine said.

“I know I haven’t been racing and I know I’m not that sharp, but I just want to get to SA Champs and be able to compete.”

In other disciplines on Wednesday night, though he was nearly two seconds outside the personal best he set last month, middle-distance runner Tshepo Tshite again displayed good form to win a blanket finish in the men’s 800m race.

And in a surprise result, Olympic silver medallist Sunette Viljoen was stunned in the women’s javelin throw, settling for second place with a 56.96m heave and falling more than 12 metres short of her own African record. 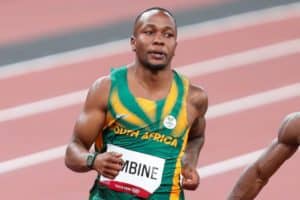 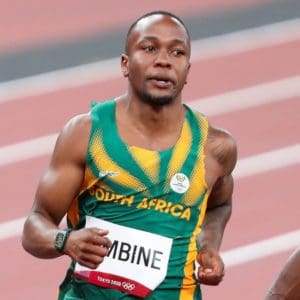