"Well, 28 years on tour and I thought I'd seen everything. I hadn't!" Westwood tweeted after the playoff, one of eight tie-breakers needed to decide groups. 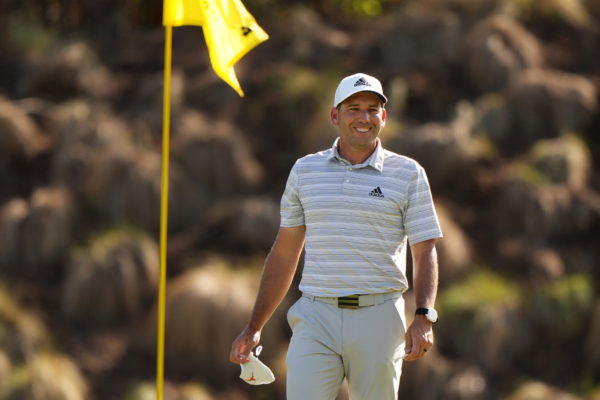 Sergio Garcia of Spain celebrates after hitting a hole-in-one on the fourth playoff hole in his playoff match against Lee Westwood of England during the third round of the World Golf Championships Match Play at Austin Country Club on Friday. Picture: Darren Carroll/Getty Images

Garcia hit a 9-iron at the 160-yard fourth and the 39th-seeded Spaniard, who sank a testy eight-foot par putt at the third to stay in the playoff, never even saw it roll back into the cup to defeat the English 18th seed at Austin (Texas) Country Club.

“Hole-in-one is amazing. It was a great shot,” Garcia said.

“Hit a great 9-iron. With the glare I couldn’t see. I saw it bounced past the hole. When we heard the people go crazy, we knew it was in. That was a nice way to finish it.”

THAT JUST HAPPENED!@TheSergioGarcia makes a walk-off hole-in-one to advance to the Round of 16. pic.twitter.com/FSbzaytTx8

“Well, 28 years on tour and I thought I’d seen everything. I hadn’t!” Westwood tweeted after the playoff, one of eight tie-breakers needed to decide groups.

Garcia was among 16 who advanced to Saturday’s first knockout matches, where he will face Canadian 48th seed Mackenzie Hughes, who advanced by halving with US 59th seed Talor Gooch.

Three of the bottom five seeds reached the weekend but the only top-16 player to advance was Spanish third seed Jon Rahm, who sank a 10-foot birdie putt on the second playoff hole to beat US 24th seed Ryan Palmer.

“It was not easy. He was the one playing the better golf,” said Rahm. “The whole day felt like a playoff, but I hit a good shot on two and made the putt.”

Top-ranked Masters champion Johnson was eliminated with a 1-up loss to US 28th seed Kevin Na, who won three of the last four holes with birdies.

Na called Johnson back to the par-3 11th to complain the No 1 picked up before Na had conceded a six-inch putt, increasing tensions. They halved the hole and no penalty was called but Johnson went into the water at 12 on the way to defeat.

Scotland’s Robert MacIntyre drove the 18th green from 371 yards to within three feet of the cup and the 41st seed rolled in a birdie putt to halve with US 61st seed Adam Long and advance to the knockout stage.

“I had probably one of the best and one of the luckiest golf shots I’ve hit in my life,” MacIntyre said. “It just shows anything can happen in this game.”

He booked a knockout match with US 30th seed Scottie Scheffler, whose 13-foot birdie on the second playoff hole ousted US sixth seed Xander Schauffele.

‘A lot of confidence’

English 21st seed Tommy Fleetwood, 4-up after seven holes, sank a 14-foot birdie putt to halve the par-5 16th and held on to edge US fifth seed Bryson DeChambeau 1 up, advancing with two wins and a draw.

“It turned scrappy for a lot of the back nine,” Fleetwood said. “Match play is that funny old week. Guys who are playing better than me are going home.”

He’ll face South African Dylan Frittelli, who lives nearby and became the first 64th seed to advance despite losing 2 up to US 40th seed Will Zalatoris.

Also meeting Saturday will be US 55th seed Bubba Watson, a two-time Masters winner, and US 54th seed Brian Harman.