Coach Jake White will be delighted that the Bulls dealt with concerted pressure from the Pumas. 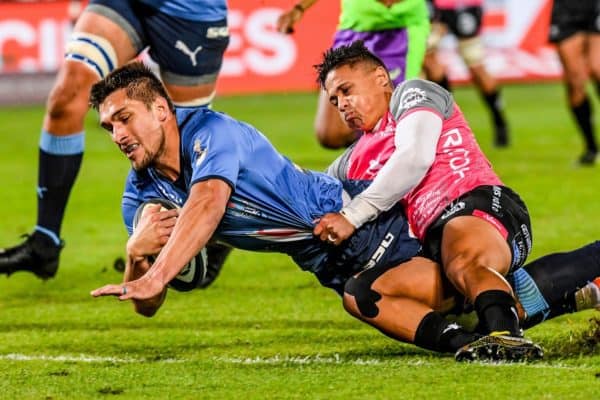 Harold Vorster scores a try for the Bulls in their Currie Cup match against the Pumas at Loftus. Picture: Gallo Images

The Bulls showed pleasing character as they rebounded from their embarrassing loss in the Rainbow Cup final, staying the course and pulling off a tight 32-27 win over the Pumas in an intriguing Currie Cup match at Loftus Versfeld on Friday night.

The Bulls dominated the set-pieces in the first half and two clinical tries by centre Harold Vorster, through a chip and regather with his first touch in a Bulls jersey, and Madosh Tambwe, who breezed past the last two Pumas defenders, gave the home side a 17-3 half-time lead.

Of course the ever-committed Pumas were going to fight back and some soft moments by the Bulls – letting wing Tapiwa Mafura bounce off a couple of tackles down the right and then Tambwe allowing a grubber to go through his legs – saw excellent left wing Etienne Taljaard get a well-deserved try.

ALSO READ: Rising Bulls prop Matanzima on injuries and his return to action

But Bulls centre Cornal Hendricks showed great game awareness as his long pass to Stravino Jacobs found the wing in space. The Pumas reacted well, but the visitors tried to counter-ruck, Hendricks picked up the ball and went scooting down the blindside and scored to give the defending champions a 25-10 lead with 15 minutes remaining.

Far from setting up a comfortable finish for the Bulls, however, that’s when things started to become really tough for the home side. The Pumas began to exert pressure on the scrums and flyhalf Eddie Fouche flourished.

He first chipped over the top and regathered to score, as Jacobs could not take the ball cleanly under the pressure, and then, after a particularly big scrum, Fouche’s wonderful long pass to Devon Williams saw the fullback come screaming through midfield and then pass out wide for Mafura to score.

It was suddenly a one-point game, but the Bulls managed to keep calm. Captain Marcell Coetzee burst down the blindside off a scrum, the Bulls then went left to exploit the space and good hands allowed replacement fullback David Kriel to step inside and score the match-winning try.

Having been so below par last week in Italy, coach Jake White will be delighted the Bulls not only played with some confidence but also dealt with concerted pressure from the Pumas in the final quarter.

After a horrid time against Benetton, flyhalf Chris Smith was especially impressive, succeeding with all six of his kicks at goal, getting stuck in on the gain-line and showing some superb hands as he got his backline away smoothly.