All eyes will be on the country’s fastest athletes on Tuesday, as top-flight domestic track and field action returns from a one-year hiatus due to the coronavirus pandemic.

ALSO READ: Lockdown frustrations being taken out on the track and field?

After bouncing back last year from a serious knee injury, the versatile sprinter will offer an indication of his form ahead of the Tokyo Olympics when he turns out in the men’s 200m race. 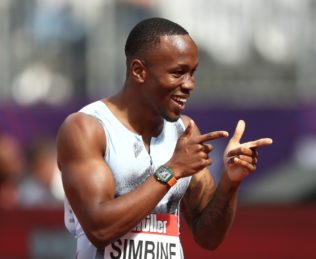 Simbine, the Commonwealth Games champion, lines up against a strong field including in-form speedster Lux Adams, who clocked a wind-assisted 10.07 earlier this month.

The entry lists in Roodepoort also include Commonwealth 400m champion Isaac Makwala of Botswana, who faces promising teenager Lythe Pillay in the one-lap dash, and African javelin throw record holder Sunette Viljoen, who will be eager to build on her 60.60m season’s best.