The young all-rounder proves a point in spearheading a difficult but rewarding victory over Pakistan in Durban. 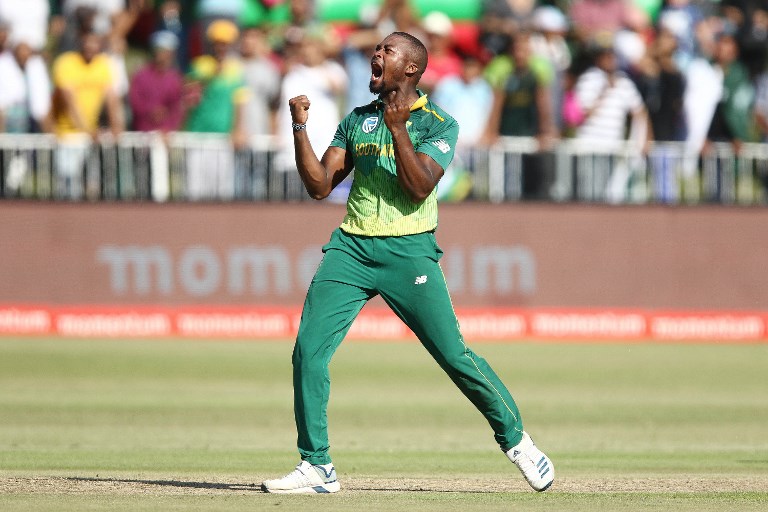 Andile Phehlukwayo of South Africa celebrates a wicket during the 2nd One Day international match between South Africa and Pakistan held at the Kingsmead Cricket Stadium in Durban on January 22, 2019. (Photo by Anesh DEBIKY / AFP)

Andile Phehlukwayo won a significant battle in the war for the Proteas’ all-rounder spot for the World Cup by brilliantly spearheading his side’s five-wicket victory in the second ODI against Pakistan in Durban on Tuesday night.

Thanks to his heroics, South Africa levelled the series at one-all.

The 22-year-old, considered more of a bowling all-rounder at international level at the moment, did his best to shed that label as he starred with both bat and ball, achieving career-bests in both disciplines.

First, on his home ground’s slow surface, he snapped up 4/22 in 9.5 very economical overs in restricting restricting Pakistan to 203 all out.

Phehlukwayo’s pace was ideally suited to the conditions, yet it was his clever use of varied lengths that made him successful.

Later on, he stroked his way to a muscular and crucial unbeaten 69 off 80 deliveries.

The left-hander rode his luck at times and was also dropped on 50 though that won’t matter in the aftermath.

There were some superb shots, notably a crunching drive for four and two sixes off Mohammad Hafeez’s sixth over.

More importantly, he shared an unbroken sixth-wicket stand of 127 with the impressive Rassie van der Dussen, both men showing maturity in guiding the Proteas home from the depths of 80/5.

Highveld Lions star Van der Dussen is certainly making sure he takes his opportunity, following up his 93 on debut with 80 here.

It was a responsible, skillful effort and proved an excellent counter punch for a brilliant opening spell from 18-year-old Shaheen Shah Afridi, who took 3/44.

South Africa will be a tad frustrated with their performance in the field.

For 32 overs, the bowlers had backed up captain Faf du Plessis’ decision to bowl first well in reducing the visitors to 112/8.

However, a swashbuckling counterattack from No 10 Hasan Ali formed the basis of a potentially vital tenth-wicket stand of 90 with skipper Sarfraz Ahmed (41).

The left-arm wrist spinner justified his selection in the place of Imran Tahir by grabbing three wickets, but once again suffered from a lack of composure in his latter overs.

He finished with 3/56 and will need to work on his game plans once he comes back for second or third spells.

Except for Sarfraz and Ali, Pakistan’s batting struggled as Kagiso Rabada (2/35) set the tone with an aggressive opening spell before Phehlukwayo and Shamsi took advantage.