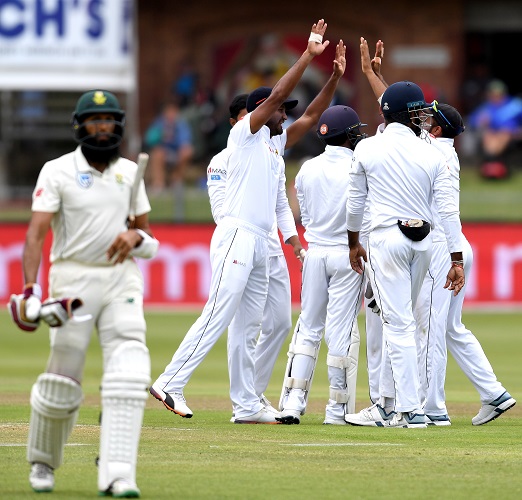 The Proteas are on the brink of an embarrassing Test series whitewash after another batting collapse on the second day of the second Test against Sri Lanka in Port Elizabeth on Friday.

Armed with a lead of 68 runs after a reasonably efficient performance with the ball, South Africa eliminated all those gains by slumping to a pitiful 128 all out in their second dig.

While the hosts’ total in the second innings would still have sent some shock waves running, it’s not really surprising anymore.

They’re no longer inclined to dig in for a long knock simply because they’ve been conditioned into believing that one will never truly feel in anymore.

The next delivery could very well be your last and that means you have to take advantage before the “inevitable” strikes.

That was particularly evident in Aiden Markram and Hashim Amla’s dismissals.

Markram found short midwicket off a delivery that should’ve gone to the fence, while his experienced teammate found the edge after rushing into a drive off a full delivery that didn’t turn.

As a result, the Proteas collapsed from 90/3 to their eventual total.

Skipper Faf du Plessis ended with an unbeaten 50, but even he played an ill-judged waft with the last man at the crease, only for the delivery to be called a no-ball.

Yet it exemplified the mindset of the batters.

Given how spooked the specialist batsmen are nowadays, it’s little wonder the tail has shown virtually no spine in this series.

Duanne Olivier supported him with 3/61, but lost control after a brilliant start and leaked vital runs.

Dismissing the islanders for 154 should’ve put the home side in a prime position.