Troubles deepen for Proteas as Nortje is sidelined by injury

One of the team's key enforcers, the 28-year-old fast bowler has been South Africa’s leading wicket-taker in Tests this year. 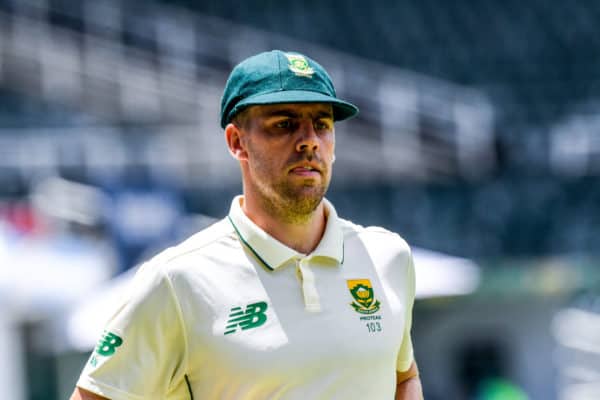 Dean Elgar was philosophical about the telling blow his team suffered with the withdrawal of fast bowler Anrich Nortje from the series against India, but the Proteas captain was more upset when he told South Africa’s administrators that they have not backed the squad, and especially the coaches and management, enough.

As has become the norm, the Proteas go into a vital series with off-field clouds hanging over their heads.

The most threatening of those is the news this week that coach Mark Boucher and director of cricket Graeme Smith are facing inquiries after being accused of racism in the “tentative” findings of the Social Justice and Nation-Building Report.

On the field, the Proteas will be without one of their key enforcers, with Nortje needing to see specialists to sort out a persistent hip injury.

The 28-year-old fast bowler has been South Africa’s leading wicket-taker in Tests this year with 25 in five matches at an average of just 20.76.

“It’s not too tough for us. As a team we’ve got used to bad news being around us the last one-and-a-half years. We just adapt to it, even though they are not ideal headlines,” Elgar said on Tuesday.

“What happens off the field is irrelevant now. We have to try and implement a game-plan and trust it. We’ve been through such crappy times, but we’ve formulated such a bond that works for us as a player group.

“There have been so many different administrators, but I feel that we have not received enough backing, especially in terms of our coaches and management. We need to show them some love,” the skipper added.

“As players, we would like to say that we back them and we know the work they put in that is not seen by the public, so it’s not nice to see them being lambasted by articles in the media.”

Another Proteas squad member who is encountering some mixed media treatment is returning fast bowler Duanne Olivier, and Elgar did his best to bolster the former Kolpak player’s image.

ALSO READ: No spectators allowed at Proteas matches against India

“The team has responded very well to Duanne coming back. He’s played with quite a few of the guys before and he has half-a-dozen Central Gauteng Lions teammates here as well,” Elgar said.

“I want us to have the best opportunity of winning matches and series – and I’m sure there’s 100% backing for that in the changeroom – which means sometimes you have to make tough calls.

“But I’m very pleased and excited to have him back. I know what he can do on the field and there are no bad feelings. I see a different energy and enthusiasm in him.

“He’s a different cricketer now and he brings a lot of knowledge and experience back into the team, which is what we need. He’s a match winner – I’m very aware of that – and that’s what I want to have.”