Van Tonder glad to be home after securing ‘special’ victory

"Watching others win it has looked so awesome, but now I can walk around and say I’m an SA Open champion." 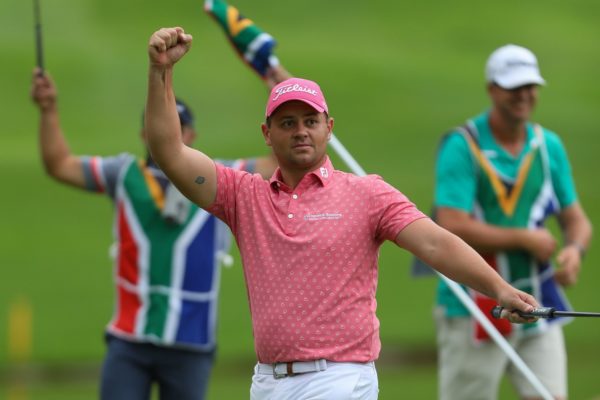 Daniel van Tonder’s conquest of the Gary Player Country Club – arguably the country’s best course – has ended an epic couple of years for the idiosyncratic golfer.

The 30-year-old Van Tonder fired a brilliant seven-under-par 65 in the final round of the SA Open on Sunday, sinking a dramatic 25-foot birdie putt on the final hole for victory, pipping Oliver Bekker by one stroke.

Van Tonder spent 2020 dominating the Sunshine Tour, then spent six months of this year competing on the European Tour, where he won the Kenya Savannah Classic and finished 75th on the order of merit.

And now he is a South African Open champion.

“I’m very happy. It’s been a long, hard year, having to stay overseas for six months because of Covid,” Van Tonder said.

“But I love this place. I love playing here and the SA Open is the special one, the second oldest tournament.

“So it’s a big thing to win. It means a lot. Watching others win it has looked so awesome, but now I can walk around and say I’m an SA Open champion.”

While the Boksburg golfer generally played extremely well in all four rounds, his 16-under-par total of 272 coming from rounds of 69, 68, 70 and 65, perhaps his most impressive characteristic was the steel he showed when under pressure.

Bekker’s three-straight birdies to finish left Van Tonder needing a birdie to win, but his approach on the 18th only just cleared the water. He then duffed his chip well short, leaving him with a daunting 25-foot putt to win.

Before those final-hole heroics, Van Tonder had managed to turn a mud-ball in the rough on the eighth – which many considered the toughest hole on which to keep an approach shot dry – into a 20-foot birdie and then chipped in for birdie from the bank above the 10th hole.

“When I was young, I was not the longest hitter so I had to chip and putt well. My short game is still not too bad,” Van Tonder smiled.

“My mindset is to attack, hit the fairways and greens and then make the putts.”