Social media was buzzing at the sight of khaki shorts and veldskoen, but the black-designed ensembles apparently are a homage to Khoisan history. 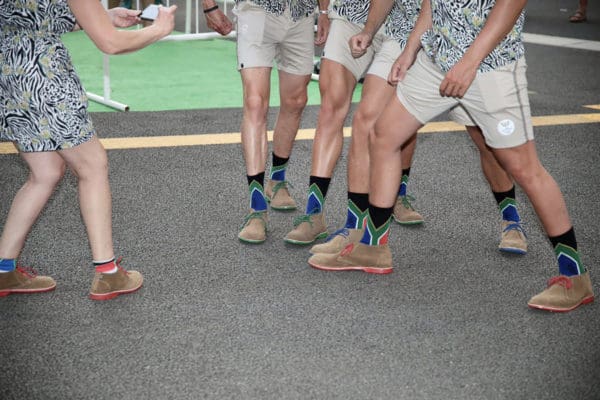 Team South Africa at the Olympics surprised many on Friday when they walked into the largely empty stadium in Tokyo on Friday looking like they were trekking through the South African hinterlands in 1836.

This was partly down to the men’s khaki-coloured shorts and zebra-print shirts paired with their veldskoen footwear, sponsored by a company actually called Veldskoen.

This will be their official attire when not competing.

Although the outfits reminded many of Afrikaner outfits, the design was actually done by black designers and the shoes themselves are also not of European origin.

The reactions on social media were mostly positive, although others were confused and saw it as a strange instance of “Afrikaner” or “Dutch settler” culture supposedly being generalised to the whole team. However, the veldskoen was first documented by European settlers who came to southern Africa more than 400 years ago, and apparently predated their arrival.

Announced at the 100-day countdown press conference at Olympic House in Johannesburg, the Olympic shoes were designed to look different from the original, with identifiable sole and trimming in the colours of the SA flag.

The boots are unisex and also come in children’s sizes.

According to Khoisan tribal folklore, it’s been argued the shoes were made 1,000 years before that to accommodate the effects of the African climate on feet, making them the first officially identified South African shoe.

Nick Dreyer, CEO and founder of Veldskoen Shoes, said: “We want people to show their support for our teams regardless of whether they’re watching in the stadium or from home.”

He wanted the fun to be shared, with a call for businesses to purchase veldskoens for their work teams in a bid to promote team spirit and unite South Africans.

Nick continued: “Businesses can buy veldskoens for their work teams and share in the spirit of being South African, by partaking in Veldskoen Fridays.

“It’s one day of the week when we want the whole country to wear their vellies to work.”

The Tokyo Summer Olympic Games are set to run for just over two weeks, with the closing ceremony on 8 August.