The Lions hooker is the new SA Player of the Year but admits he'll need to stay grounded to reach new heights. 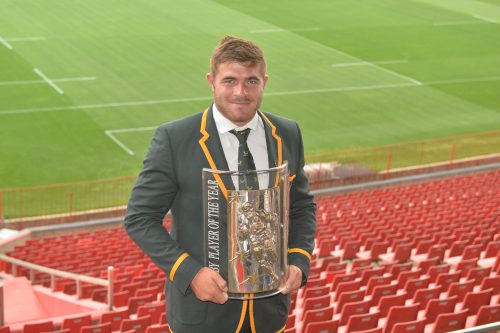 Marx, 23, who has played 14 Tests for the Boks, became the first Lions player in the 14 years to walk away with the award since wing Ashwin Willemse in 2003.

“I’m really thankful and feel very humbled. But I wouldn’t have been on the field if it wasn’t for my team-mates and this award is actually for them,” said a modest Marx at Ellis Park on Friday.

“Albany was a really low point last year but we want to improve all the team and I’m looking forward to a great year, but first there’s the Super Rugby and that’s my focus at this stage.”

“There are new things happening in Bok rugby and there are always new stars coming through, so I will have to stay grounded and keep working hard,” said Marx.

* The Springbok Sevens team and their coach, Neil Powell, were also rewarded for a sterling season in which they won the HSBC World Rugby Sevens Series by winning the awards for Team and Coach of the Year. The fleet-footed Rosko Specman was named Springbok Sevens Player of the Year.

* Juarno Augustus, who was named the World Rugby Under-20 Championship Player of the Tournament last June, won the award for Junior Springbok Player of the Year.

* Recently-capped Springbok Warrick Gelant, who also represented the Blitzboks and Junior Springboks earlier in his career, was the Currie Cup Premier Division Player of the Year, and the Griffons’ Jaun Kotze won the accolade for the First Division.

* Craig Barry from Western Province, who is currently playing for the Cheetahs in the Pro14, was named Supersport Challenge Player of the Year, and Babalwa Latsha, also from WP, won the Women’s Achiever of the Year award.

* Jaco Peyper, who refereed the first Test between the All Blacks and the British and Irish Lions, as well as the Super Rugby and the Currie Cup Premier Division finals, was named the Referee of the Year.

This Lions star is not living in the past