Four of the best for Madosh Tambwe as Lions find roar

The Kinshasa-born winger has a field day on the attack as Swys de Bruin's troops underline their class against the Stormers. 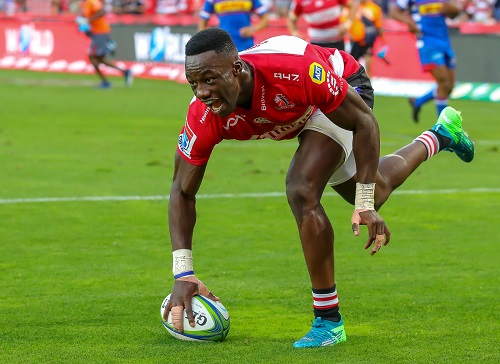 Madosh Tambwe of the Emirates Lions scores his third try during the Super Rugby match between Emirates Lions and DHL Stormers at Emirates Airline Park on April 07, 2018 in Johannesburg, South Africa. (Photo by Gordon Arons/Gallo Images)

After two defeats in their last three games at home, the Lions bounced back in no uncertain terms to thrash the Stormers 52-31 at Ellis Park on Saturday night in their Super Rugby derby.

The victory underlines their status as undoubtedly the top dog in the SA Conference.

Outscoring the Stormers by a whopping eight tries to four, this outing will lay a nice foundation for the Lions’ tour, which starts after their bye next week.

With a commanding lead of 31-10 at the break, the Lions simply build on their momentum to stroll to a win.

The damage was done in the first half by a hat-trick for 20-year-old left wing Madosh Tambwe, who showed some predatory skills and class for haul of tries.

It was always going to be very difficult not to give this accolade to Tambwe after his heroics in scoring four tries. He will be the first to admit that flyhalf Elton Jantjies and fullback Andries Coetzee played a crucial role in his showcasing his incredible speed in setting up at least two of his four tries.

* Tambwe’s blitzkrieg inside the opening 13 minutes to give the Lions a 19-0 lead clearly caught the Stormers off-guard. The tone was set in the first minute when he ran past the whole Stormers defence following a chip by Stormers wunderkid Damian Williamse which went straight to him.

* The Stormers had a better second quarter and combined some robust and delightful moments on attack, culminating  in prop Wilco Louw’s try. Blindside flank Pieter-Steph du Toit at times appeared to take on the entire Lions pack on his own. It was a storming performance.

* While Tambwe was in awesome form, hooker Malcolm Marx and flank Kwagga Smith were also superb in killing the Stormers on the deck, where Stormers captain Siya Kolisi was never the big factor as anticipated prior to the clash. The Lions’ potency on the counterattack was also a joy to behold.

*The Lions suffered a setback when abrasive flanker Cyle Brink left proceedings with a shoulder injury in the 31st minute but his replacement Marnus Schoeman worked brilliantly in tandem with Smith.