Rassie Erasmus' troops show real class in producing a magnificent performance that show once again that no side can rattle the world champions as well as they do. 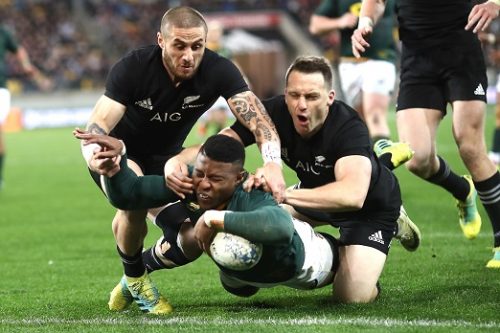 Aphiwe Dyantyi of South Africa scores a try during The Rugby Championship match between the New Zealand All Blacks and the South Africa Springboks at Westpac Stadium on September 15, 2018 in Wellington, New Zealand. (Photo by Phil Walter/Getty Images)

President Cyril Ramaphosa praised the Springboks for defeating the All Blacks in the Rugby Championship clash in Wellington on Saturday.

Ramaphosa congratulated the Boks for putting up a “fierce fight” against the All Blacks.

The president tweeted: “Our team showed true character from start to finish. Continue to fly the flag, you make us proud.”

A job very well done by our Springboks for the fierce fight and victory against the tough All Blacks. The determination you demonstrated today, away from home, is beyond fulfilling. Our team showed true character from start to finish. Continue to fly the flag, you make us proud. pic.twitter.com/5LKH0g7FAj

There were scenes of utter joy as a brilliant Springbok performance saw them cause one of the biggest upsets in recent years by beating the All Blacks 36-34 in a pulsating Rugby Championship clash in Wellington on Saturday.

It was the Boks’ first triumph since 2009 on Kiwi soil and the first time in seven attempts that they managed to win in the New Zealand capital.

While the All Blacks scored six tries to five, the difference proved to be the goal-kicking of Kiwi No 10 Beauden Barrett, who missed four of his six kicks at goal.

In contrast, his counterpart Handre Pollard missed one.

South Africa predictably had to outlast the world champions in the second half but they responded with a magnificent effort on defence, causing the All Blacks all sorts of problems with their rushing pattern.

However, this wasn’t just a dogged effort.

The Boks varied their attack superbly and essentially took every scoring chance on offer.

They also illustrated again vividly that their physicality remains one of the biggest factors in disrupting New Zealand’s momentum.

After he had been guilty in the past of disappearing in tight contests, Bok No 8 Warren Whiteley was superb. He was literally everywhere as he put his body on the line, while also taking over the captaincy from Siya Kolisi in the 66th minute and displaying customary calmness. His try-saving tackle on All Black replacement scrumhalf TJ Perenara was a highlight.