The national coach defends his decision to arguably overuse Faf de Klerk in the vital No 9 jersey at the expense of building depth. 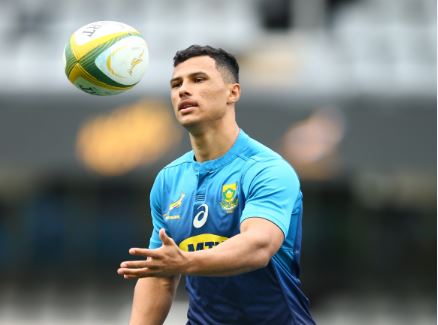 Reports surfaced this week that Faf de Klerk might be unavailable for the duration of the Springboks’ end-of-year tour to Europe and presents a huge headache for national coach Rassie Erasmus.

The 26-year-old’s impact over the international season to date has been so compelling that Erasmus has been reluctant to hand game-time to any other candidates.

That’s a problem given that South Africa has a substantial depth crisis in the position.

Erasmus insists he’s aware of the problem but also reiterated that he needs to balance priorities.

“We would’ve liked to give more game time to certain guys, but there’s also a risk if you lose matches and momentum because you’re making changes in a key position, and then the whole train can go off the rails,” he said.

The Bok mentor though received some criticism for his use – or lack of it – of young Embrose Papier.

The 21-year-old Bulls halfback has sat on the bench most of the time or only been afforded single digit minutes on the field, usually as a winger.

“With Embrose, him being with us and not getting game-time is actually better than him being not with us and only getting 10 to 15 minutes at the Bulls (where Ivan van Zyl is the incumbent),” said Erasmus.

“Even though he hasn’t been able to get all that much game time, I think guys like that would have really benefited a lot from being in the camp.”

To further justify his decisions, Erasmus noted that De Klerk himself actually needs as much game-time as possible with the World Cup less than a year away.

“Even if you play him in all the games before next year’s tournament, he himself will only have gained about (25) caps, which isn’t a lot,” he said.

However, there is confidence in Lions stalwart Ross Cronje’s ability to step up in Europe should De Klerk be absent.

“Sometimes people forget that Ross already has quite a few caps to his name, and he’s played in pressure situations. So if he has to come into the team, it’s nothing new and we know what we have in him.”

Siya, Eben the standout players in a special Bok team of 2021
1 week ago
1 week ago
PREMIUM!

Siya, Eben the standout players in a special Bok team of 2021
1 week ago
1 week ago
PREMIUM!