This is the Shark with the biggest bite before the final

The Durbanites might boast bruisers like the Du Preez twins and Thomas du Toit, but their biggest asset at Newlands is a guy who likes to operate in the shadows. 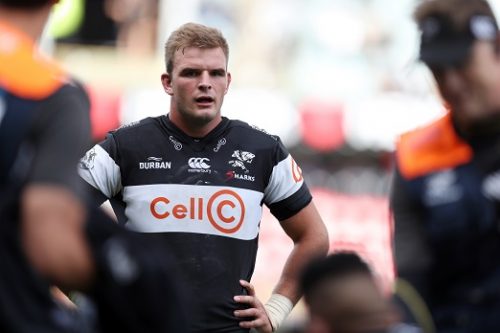 The return of Jean-Luc du Preez is understandably one of the standout developments in terms of national interest after the Sharks named their team for Saturday’s Currie Cup final against Western Province.

Yet he won’t be the most important member of the pack at Newlands.

That label befalls a man who’s flown under the radar all season, but has consistently maintained high standards.

Tyler Paul truly has become indispensable to the Sharks’ cause.

Recruited from the Southern Kings last year, the 24-year-old flanker has gone from strength to strength.

Able to play lock as well, Paul will be in the unfamiliar role of opensider in the Mother City – an acknowledgement not only of his all-round ability but also his importance.

“He’s played some great rugby. He’s a great guy to have in your team.”

And that’s not only because of his attitude.

“He delivers the unseen hard work, the unfashionable stuff. It’s going to be an abrasive battle and that’s why I had to select Tyler and Jean-Luc in the same loose trio,” said Du Preez.

He won’t have to worry about Paul standing up to his Province counterparts and, in fact, winning his collisions.

The man from Duiwelskloof in Limpopo has made the second most tackles, won the second most lineouts and is the fourth most prolific ball carrier in this year’s tournament.

It’s a perfect illustration of his worth.