In a thrilling match that produced 11 tries it came down to the seasoned midfielder to secure the win for the home team. 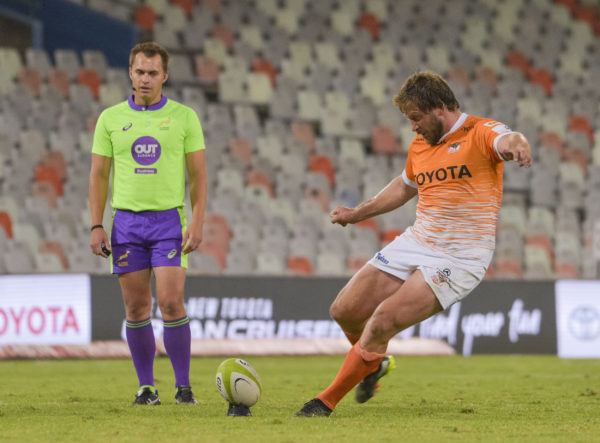 Sharks coach Sean Everitt would have been apprehensive when his team went 7-28 down late in the first half against the Cheetahs in Bloemfontein on Wednesday night, but in the end the KwaZulu-Natalians fought back superbly and it took a 40-metre penalty by Frans Steyn in the 80th minute to scrape a 39-38 win for the Free Staters.

The Sharks had actually played decent rugby in the first half, but mistakes and turnovers allowed the Cheetahs to show their attacking brilliance as they ran in four tries to lead 28-12 at the break.

But in the second half the Sharks showed their attacking abilities, giving the Cheetahs defence a torrid time.

The Sharks replacement front row of Michael Kumbirai, Ntuthuko Mchunu and Fez Mbatha showed they can perform at this level as they earned scrum penalties that helped pile on the pressure on the home side in the second half, while Manie Libbok came on at flyhalf and showed he will be a fine back-up to Curwin Bosch when serious competition resumes.

Libbok’s linking and passing game constantly had the defence guessing and it was his brilliant individual play in slipping through a gap, regathering his own grubber and then kicking ahead again before passing to substitute flank Celimpilo Gumede for the try that gave the Sharks the lead with 13 minutes remaining.

The Cheetahs certainly played their part in a match that featured 11 tries and seemed to be played at a billion miles an hour at times, but eventually ensured they secured the win rather than risking whatever rewards would come from a more expansive approach.

Steyn was a pillar of strength at inside centre and once again showed why he is considered rugby royalty and he was bang on the money with the final kick at goal after a high tackle by the Sharks.