The Bulls were brutal in defence and lethal in finishing their chances as they won 44-10. 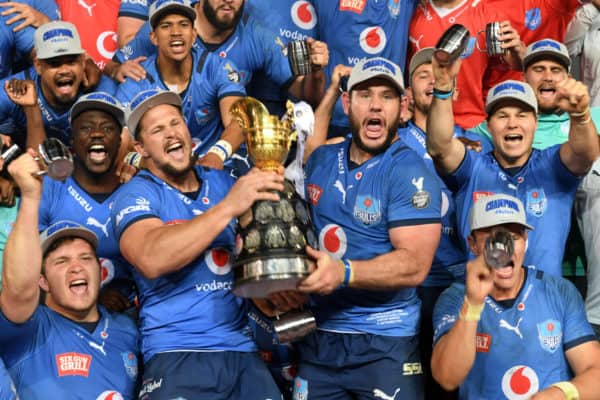 Leaders through the season, Arno Botha and Marcell Coetzee of the Bulls, celebrate with their team-mates after winning the Currie Cup on Saturday. Picture: Lee Warren/Gallo Images

Bulls coach Jake White praised his team for producing almost the perfect game in their record Currie Cup final win over the Sharks on Saturday night: forwards and backs were in unison, the attack was clinical and the defence showed no weakness. And he believes their performance has given them huge confidence and cohesion as they head to Europe.

The Bulls battered the Sharks 44-10 at Loftus Versfeld, the biggest winning margin ever in a Currie Cup final, and the scoreline did not flatter them, so complete was their performance.

“Our captain, Marcell Coetzee, was saying that everything felt so composed and in synch, the backs and forwards just working slickly together. That was very close to the perfect game based on getting chances and making sure we take them, no soft moments in defence and we did not give away many penalties,” White said.

“That’s how you play rugby and it’s going to create massive confidence and cohesion going forward.

“When we play like we did tonight then I’m sure everyone at this incredibly proud union is very happy. To get that composure from what is a young side is very pleasing and it felt like we were in control the whole time.

“I’m also very happy that in the last two weeks there has been a definite progression in our game; that’s what you want to see – that at the back end of the competition you get better.”

The value of aggressive defence was once again clearly shown as the Sharks dominated possession and territory in the first half, but foundered on the rock of the eager Bulls tackling. The Sharks trailed 19-3 at halftime and the result of the final was all but settled.

“That first set of defence, against attack after attack, and then after 12 phases we get the turnover and the penalty, kick it downfield and then score a try from first phase – it does not get better than that, taking your first chance in a final,” said White.

“Big moments are crucial in finals, but they don’t just happen on attack, but in defence too.

“The Sharks wanted to have a go at us, but we could counter that because we were able to defend and keep our shape, and not allow them to get around us.

“Altitude catches you and then when they were dead on their feet, we were able to pounce. But it was our defence that gave us the ability to counter-punch. I’m very proud for us to have won back-to-back Currie Cups now.”