Sharks eager for ‘new energy and fresh competition’ in Europe

Everitt admitted his team were not up to scratch against the Bulls in the Currie Cup final. 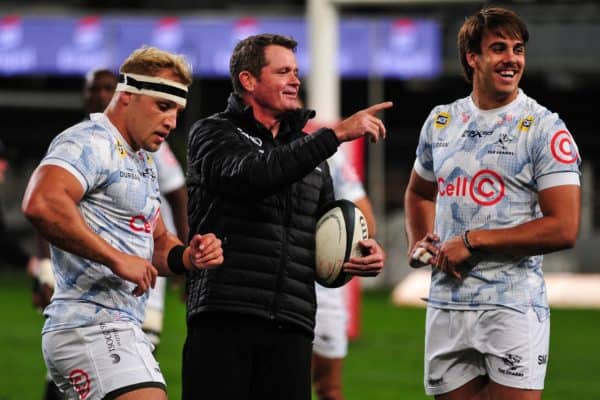 Sean Everitt with some of the Sharks players ahead of a recent Currie Cup match. Picture: Gallo Images

The Sharks, having been humbled in the Currie Cup final by the Bulls, will now head to Europe with a clean slate and looking forward to butting heads against some different opposition, coach Sean Everitt said after their 44-10 defeat at Loftus Versfeld at the weekend.

The Sharks and the Bulls have consistently been the best sides in South Africa over the last two years, but the Sharks have not managed to claim any silverware, losing two Currie Cup finals at Loftus Versfeld in nine months and finishing second in the Rainbow Cup.

“We’re looking forward to Europe now. There will be a new energy and fresh competition, plus the Sharks are a team that normally travels well. But we will be looking for a massive improvement on this performance,” Everitt said.

“We have quite a few youngsters in our team so every game is a learning experience, an opportunity for them to get better. Our first game is against Munster and we will stay in Ireland in quarantine for a minimum of 10 days, but we will be able to train in that time so it’s no problem.”

While Bulls coach Jake White praised his team for an “almost perfect” display in the final, Everitt tended towards the opposite side of the spectrum.

“In all areas of our game we were not up to scratch. It was down to individual errors. Our fundamentals let us down,” he said.

“We had opportunities in the first half but we just couldn’t nail them down, while the Bulls had four shots at us and scored three tries thanks to poor defence.

“I always thought that the team that won the first 30 minutes would have the best chance of winning the trophy. That was an important part of the game.

“But conceding soft tries, all three of them from lineouts, was really disappointing and not the start we wanted. The decision-making on defence was just wrong.”